National Working Women’s Day: On a day of celebrating achievements, a resolve for nation-building

National Working Women’s Day: On a day of celebrating achievements, a resolve for nation-building 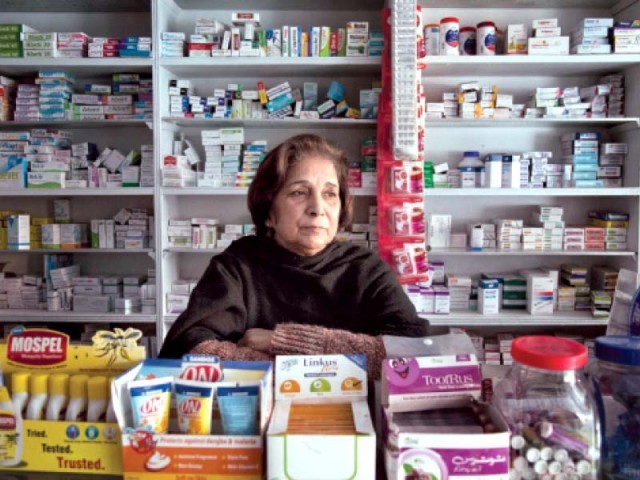 Roofi Khalida runs a small pharmacy in Tariq Market, Sector F-10/2. After her husband passed ten years ago, Roofi sold all her valuables and invested in the small business, hoping to make a future for her two children. Despite exploitation from property lenders and harassment from men in the market, Roofi continues to build a small but regular customer base through her inspiring personality and strong resolve. PHOTO: MYRA IQBAL/EXPRESS

Despite all the hardships they face, working women in Pakistan have refused to give in to the patriarchy in our society and have proven their commitment to working shoulder-to-shoulder with men.

To acknowledge their contribution, December 22 was designated as “National Working Women’s Day” last year by the government. To celebrate how far they have come, working women from across the twin cities held a walk from Fawara Chowk to Raja Bazaar in Rawalpindi on Saturday.

Holding placards inscribed with slogans such as “Empowered women – Enlightened society” and “Gender discrimination – a hurdle in institutional progress,” hundreds of working women teachers, health workers, engineers, journalists, lawyers, civil servants and government workers took part in the hour-long walk on the busy Benazir Bhutto Road. They all resolved to extend their role in nation-building.

Senator Hameed said steps need to be taken to ensure security to women, especially those whose jobs required them to work outdoors. She said there is no doubt in the fact that the pace of national progress can be accelerated through women education and empowerment.

“There is a need to provide secure and congenial atmosphere to women at workplaces. And this can only be ensured through raising awareness and sensitising men,” opined a female college lecturer who took part in the walk.

Insecure work environments, job insecurity, family opposition and lack of recognition in the informal sector and transport facilities are only some of the problems that working women face today.

Among such women is Aleena, a courageous 27-year-old who began working at a young age a as a helper at a  saloon in Rawalpindi some fifteen years ago. Her father had passed away and her mother was unable to work after loosing her eyesight to diabetes. She was the only one left to earn for her family.

“I still remember the day I quit school and started working at the  saloon,” she recalls. “I had no choice, I was the eldest one and there was no one else for us.” She says her family would raise objections over her job but shed braved the criticism because she knew what was at stake.

When she started working as a receptionist at a call-centre, where she had to work late hours, she was often subjected to sexual harassment at the hands of fellow commuters in public transport. But that too did not falter her commitment and she went on to continue her studies.

Aleena now works for a telecommunication company at a reputable position, but for that she has come a long way.

Sadia*and Maryam*, who have been serving as nurses at a public hospital for the past ten years, say they are subjected to sexual harassment by patients and attendants almost every time they are on a night shift.

“There are times when we think about changing our profession,” said Sadia. “But we love our jobs, all we need is some security,” she adds.

Farzana Bari, a prominent women right activist says that women in the informal sector are working in miserable conditions. “They are given a minimal pay of Rs7,000, which too they are sometime denied, and they are not covered under any labour law.” Meanwhile in the formal sector, women lack facilities such as day-care centres and even basic ones such as separate washrooms, she says, adding that they are not even given the chance to work on senior posts.

Maliha Hussain, program director at Mehergarh, says some laws have been passed recently for the protection and welfare of working women, their implementation remains the major challenge.

PIERA should be a self-governing body, recommends NA committee