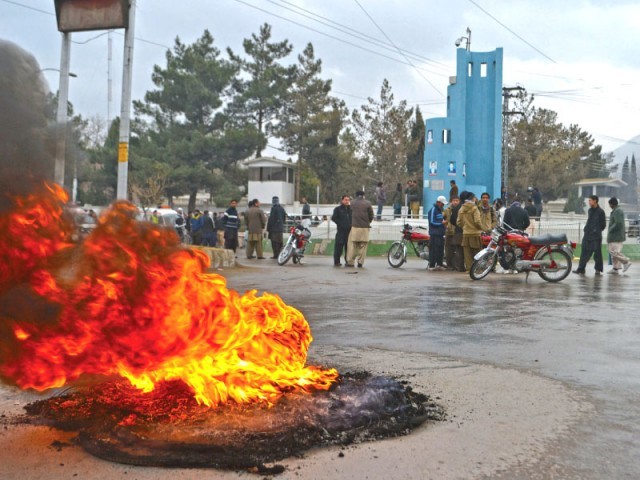 Protesters gather near burning tyres as they demonstrate against the killing of Khadim Hussain Noori, Director of Public Relations in Quetta. PHOTO: AFP

The director of the provincial government’s public relations arm, Mirza Khadim Hussain Noori, and two policemen were waylaid and gunned down on Monday morning in an attack on the Adalat Road area of Quetta city.

Speaking to reporters, Home Secretary Akbar Hussain Durrani confirmed that a car carrying Noori, director of public relations (DPR), was intercepted by armed men while it was making its way to the office. The attackers shot at the vehicle and fled the scene.

Security forces, including the Frontier Corps and police personnel, rushed to the spot and cordoned off the area. The deceased and injured were shifted to the Civil Hospital.

“Three police officers who were on duty near the City Courts chased the killers. They engaged the attackers in a brief firefight which led to the deaths of two policemen. The attackers managed to flee,” the home secretary said.

“We concede there was an intelligence lapse but we are optimistic that the culprits will be arrested,” the home secretary said, adding that the provincial government was planning to launch an oepration against criminals involved in targeted killings and other heinous crimes in the province.

Commending the slain police officers, Capital City Police Officer (CCPO) Quetta Mir Zubair said, the officers responded rapidly and lost their lives in the line of duty. “We have lost 26 officers, in different incidents of targeted killings during the last six months,” he added.

Balochistan Governor Nawab Zulfiqar Ali Magsi and Chief Minister Nawab Aslam Raisani condemned the killings. Meanwhile, the relatives of the deceased DPR staged a demonstration in front of the IG Police Office and chanted slogans against the government, while demanding the arrest of the killers.