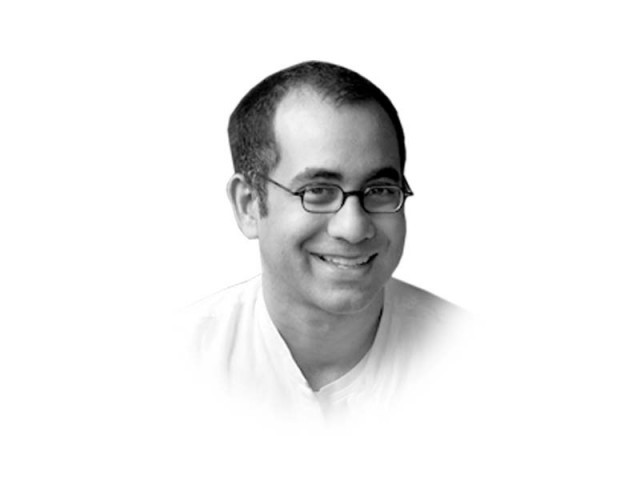 Artist Khuda Bux Abro is helping stage an exhibition of posters at the Arts Council of Pakistan around the theme of “Gender Equality Now.” The exhibit simultaneously opened alongside 40 other exhibits around the world on December 10, which was International Human Rights Day. It was organised by the Paris-based non-profit organisation 4tomorrow, which encourages people to create posters that prompt public debate on topical issues. I worked with Abro in the early Nineties, drawing cartoons for the magazine Newsline. I admired his art, which was always socially powerful. One of my favourite 4tomorrow posters is of a young, destitute girl grimacing as she rips off her shirt to reveal the familiar Superman ‘S’ insignia underneath. The caption on the poster reads, “Stereotype This.”

Dominique Strauss-Kahn has an intransigent panache for stereotyping women. This week, Kahn settled with a hotel maid who had brought a civil action lawsuit against him. Nafissatou Diallo had accused the former International Monetary Fund chief of sexually assaulting her in a Manhattan hotel room in May 2011. She described the act as “violent and sadistic.” Since returning to France, after a stint at Riker’s Island, Strauss-Kahn is facing additional allegations of sexual misconduct. On December 19, Kahn will face pimping charges occurring at sex parties he attended with prostitutes. Kahn may see all men as being created equal, but unquestionably sees women as weak inferiors.

Speculation has been soaring these past few weeks if Hillary Clinton will run for President in 2016. She is considered a presidential front runner for the Democratic Party in 2016. December is her last full month as President Barack Obama’s secretary of state. Newt Gingrich’s declaration this week that “the Republican party today is incapable of competing” against Hillary Clinton, should she run for president, is an indication of how powerful she is. Women will see a Clinton presidency as an important breakthrough. A Clinton presidency would bring a gender perspective to the White House — empowering women. The creative brief for the “Gender Equality Now” exhibition carries a quote from Clinton that states, “As long as girls and women are valued less, fed less, fed last, overworked, underpaid, not schooled and subjected to violence in and out of their homes, the potential of the human family to create a peaceful, prosperous world will not be realised.” Her presidency could consolidate many of these concerns, making them an integral component to her mandate and constituents.

This weekend, a rhesus monkey dressed in a shearling coat and a diaper was found roaming in a Toronto IKEA store. Darwin, the monkey, became an instant celebrity — his photograph flashed in papers around the world. The rhesus monkey is often forced by street performers in South Asia to dance for paying spectators and is sharply reprimanded with a bamboo stick when it refuses to perform. But the monkey is a wild animal. Wild animals have evolved to thrive in their own native environments. They are not adapted to live with humans. It is strange how we think of women as wild animals, discursively establishing inequalities and excusing sexual abuse. Dos Equis, an imported beer, is one of the few beers that saw its sales increase in North America by 17 per cent this year. It advertises itself by stating, “Approach women like you do wild animals — with caution and a soothing voice.”

It is a wonder we do not prosecute gender stereotypes and inequalities as a civil rights crime.