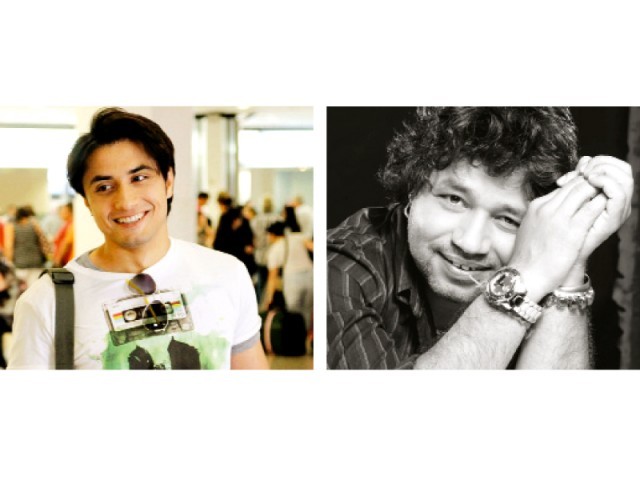 The possibility of a joint Indo-Pak industry was discussed. PHOTO: FILE

Ali Zafar has been investing his energy in becoming one of the most prominent cultural ambassadors of Pakistan.

He attended Aaj Tak Agenda 2012 in New Delhi along with singers Shafqat Amanat Ali and Kailash Kher from India recently, where they not only discussed the possibility of a joint and united Indo-Pak music industry, but also put their vocal talents together to sing in harmony.

Zafar believes it is up to the present generation of musicians to send out a message of peace between India and Pakistan. He stressed that the past cannot be changed, but the future can be shaped so that people in this region can live in peace and harmony. “Our generation is obligated to tell our kids a different story to the one we were told,” he said, in regard to Indo-Pak relations, according to a press release.

The common motive of bringing peace in the region by reaching out through cultural means was the highlight of the Agenda Aaj Tak 2012 summit. This message was made even more profound when Zafar, Shafqat and Kher all sang Allah Tero Naam together in perfect sync, displaying the truth that music really does know no boundaries.

Following the event, a small ceremony took place in Karachi where Kher said, he was touched by the unrestrained adoration he received from the female audience and said the crowds in Karachi were very appreciative. “Just as they do in India, people were climbing on to trees and rooftops to get a glimpse of our concert,” he said. “I never imagined the kind of overwhelming welcome I got in Pakistan — everyone understands music.” Kher feels that that the masses of both countries do not hate each other and the real picture is different from what the media depicts.

The session was filled with ample entertainment; Zafar along with the other two great artists sang Jhoom to kick off the session. Kher then proceeded to mesmerise the audience with a rendition of one of his most famous songs Toota Toota Ek Parinda. Shafqat, on the other hand, dedicated Ye Nayan Dare Dare, Yeh Jaam Bhare Bhare to the delighted Bollywood actor Madhuri Dixit in the audience who was serenaded by each of the artists in turn.

The latest Khiladi: Too much comedy, too little action