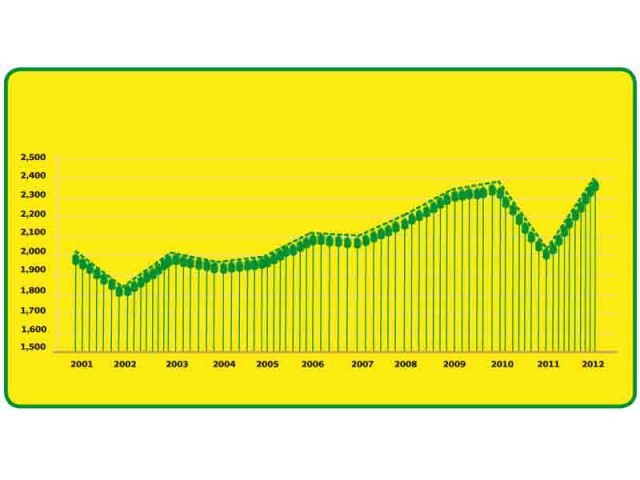 While active government interference in the wheat market can harm farmers’ interests, the near complete lack of government intervention in the cotton and rice market, though not without its pitfalls, has been more beneficial to farmers.

Unlike sugarcane and wheat, cotton and rice prices in Pakistan are determined by market forces. And while farmers allege that textile conglomerates (in the case of cotton) and commodity traders (in the case of rice) often collude to set market prices, the scope for anti-farmer manipulation is considerably more limited, given the lack of market power by any one player or group of players.

Cotton prices in Pakistan are close to those of the global market rates, allowing farmers the opportunity to benefit from a relatively globalised market for their product. Yet the textile lobby frequently complains that they should not be forced to pay global prices and ask the government to depress local prices by banning the export of raw cotton and cotton yarn.

On occasion, as in late 2009, the government gives in, forcing farmers to sell their crop to local textile conglomerates, which then depresses local cotton prices, since Pakistan produces significantly more cotton that the textile industry can consume to make its products.

For the last few years, however, the government has largely left the market alone, controlling neither prices nor creating artificial surpluses, and farmers in Punjab report receiving international prices, which they are broadly happy with.

Yet the textile lobby has been unhappy with being forced to compete on the global market for what they feel should be cheaper, locally grown cotton. Over the past few months, farmers allege that the textile lobby has started trying to manipulate the market through false information, such as over-reporting cotton crop figures, in a bid to drive down prices by creating the illusion of an oversupply.

This technique, however, has broadly failed, since it does not take into account the fact that, in a free market, misinformation rarely has any long-term impact on market conditions. Despite the attempts at over-reporting production figures, cotton ginners have faced shortfalls for their production season, according to Zulfiqar Ali, chairman of the Zulfiqar Cotton Ginners Mill in Khanewal.

Farmers appear to be unhappy with the Rs5,500 to Rs6,000 per 40-kilogrammes that they are currently receiving, but many point out that the prices are nearly double what they were five years ago.

Rice, meanwhile, is a crop that is grown in Pakistan principally for export.

According to data produced by the Pakistan Bureau of Statistics, between 80% and 85% of Pakistan’s rice crop is exported, with only a small fraction used for domestic consumption. In fiscal 2012, Pakistan exported just over $2 billion worth of rice, though Taufeeq Ahmed, a rice exporter, said that the country’s total exports of the commodity could easily be 50% higher if the market were more efficient.

Although rice is sold in a market that is free, the benefits to farmers and consumers are limited by the fact that the market is also inefficient. The number of intermediaries between a farm and the retail consumer can be as high as a dozen, which results in the farmer getting a lower price than he or she could, and the consumer paying more than they would in a more efficient market. The farmgate price can be between Rs40 and Rs40 per kilogramme, while the retail prices frequently exceed Rs120 per kilogramme.

The problem, say commodity traders, is the fact that the supply chain needs so many middlemen because no single player has a large enough storage capacity.

The supply chain is constrained by the fact that while the rice crop is harvested within a one-month period, it is consumed year-round, thus creating the need for a large storage capacity which no private player has. And since rice is not a staple part of the Pakistani diet, the government does not allocate any of its resources to help rice farmers.

Fighting to keep the bread-basket filled