US diplomat writes and sings Pashto song for Malala

US diplomat writes and sings Pashto song for Malala 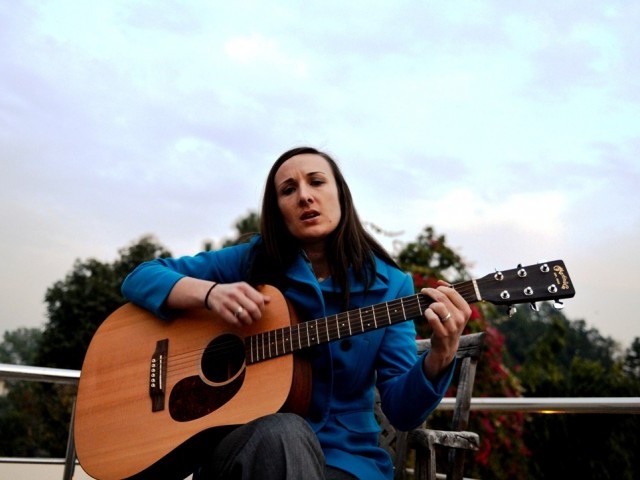 ISLAMABAD: A US diplomacy official has written and sang a Pashto song “Jenaiy”, which means “girl”, as a tribute to Malala Yousufzai, the teenager who was shot in the head by the Taliban for promoting education for girls.

She has taken a novel approach to diplomacy in Pakistan – singing in a local language to build bridges, where anti-Americanism runs rampant.

Shayla Cram, a public diplomacy officer assigned to Peshawar, the gateway to al Qaeda and Taliban strongholds in the northwestern tribal belt, has not only learnt Pashto but has penned her own Pashto-style song.

It features Cram on guitar and vocals and a Pakistani musician, Sarmad Ghafoor, on the rabab — a traditional stringed instrument — and urges girls to have hope for the future and pursue their dreams.

“There’s definitely need in Pakistan to encourage young girls and females in their education and leadership, to make them young leaders, and that’s the basic message of my song,” Cram told AFP.

Women in Pakistan, particularly in northwestern rural areas, are frequently treated as second-class citizens, subjected to horrific violence in the name of family “honour”, and denied education.

Nationwide, fewer than half of women can read and write and militants are violently opposed to girls going to school — as showed by the October attack on Malala, now recovering in Britain.

Despite the anti-American feeling, Cram says the song has had a good response so far. She now plans to work with local musicians to record a whole album in other Pakistani languages.

“I would say 97 percent has been overwhelmingly positive and the other few people who have said that (given negative reactions), for example on our embassy Facebook page, are always our harshest critics no matter what we do,” she said.

Pakistan-US relations are on the rebound from a series of crises in 2011 that saw a CIA operative held for double murder, Osama bin Laden killed by US troops and botched air strikes kill 24 Pakistani soldiers.

Peshawar is regularly hit by militant bombings, including a deadly suicide attack on a US government convoy in September — and American diplomats’ movements are tightly controlled due to security worries.

Reaching out across the airwaves is a cheap and easy way to get around the frustrations of restrictions to make contact with people, Cram says.

“How can you do that for example in Peshawar when you can’t leave the (consulate) gates? How do I reach someone’s heart and let them know who I am and what I’m about as an American when I can’t physically go out?” she said.

“One of the most effective ways I think is through music, because it’s something people can connect to and understand in a simple way.”

The 29-year-old is no stranger to the musical limelight — she taught herself the guitar while working in west Africa, writing songs about HIV/AIDS and child trafficking that were still played on Togolese radio after she left the country.

While the embassy has been supportive, Cram received no financial assistance.

“Jenaiy” was recorded in a studio with the help of Pakistani friends in the music industry, and a slick video was shot in someone’s garden on the edge of Islamabad. The track has been sent to radio stations across the northwest.

Pashtun culture has a rich and vibrant musical tradition, but critics warn Cram faces a tough task in trying to win over the public.

Sher Ali, a music journalist for English-language newspaper The Express Tribune, said success would depend on how much air play the track gets.

“The key is to get on the regional networks which connect to people in the grass roots,” he told AFP.

“The music is very mainstream and will connect with a certain class of urban listener, but Pakistan is very divided and a lot of the population you want to connect to with this message is working class or in rural areas.”

Rasheed Safi, head of news at Buraq Radio, one of the biggest stations in the northwest, welcomed Cram’s efforts but said her accent — picked up from her Afghan teachers in the US — might put listeners off.

“This is a good attempt and I appreciate that a US diplomat has learnt Pashto language and then sung a song, but the accent is Afghani which is less attractive for Pakistani Pashto music lovers,” he told AFP.

Senior US diplomat in Pakistan for talks