A story of bitterness: Meet the women of ‘Talkhiyan’

A story of bitterness: Meet the women of ‘Talkhiyan’ 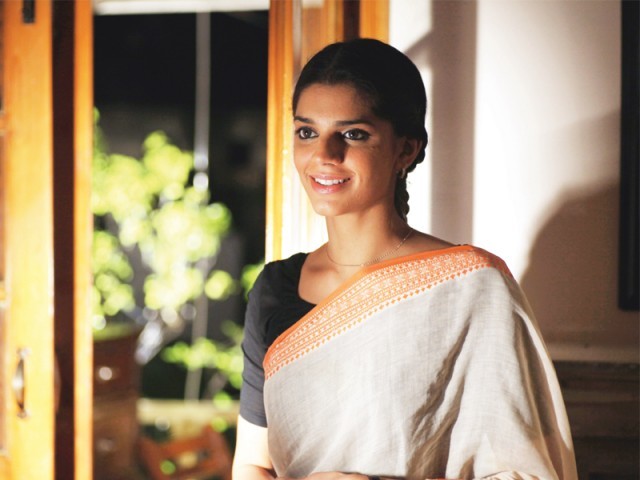 The story of Express Entertainment’s upcoming soap “Talkhiyan” (Bitterness) highlights the stereotypical mentality of men that live by their ancestral pride and deep-rooted notions of a caste system. It depicts the frustrations of a mother, wife and daughter who are provoked by society. Hypocrisy is the underlying theme, involving bitter love, and conservative values.

The drama serial is inspired by Indian author Arundhati Roy’s 1997 novel The God of Small Things, which is a story of fraternal twins whose childhood experiences have defined how they should love others.

The drama is presented by Zoya (Mehak), who narrates the tale of her mother Bibi (played by Sanam), who has suffered and been abused. In a role different from her usually characters, Hina Bayat plays Appu, Zoya’s angry aunt. The drama serial is set to air on Express Entertainment on December 9, Sunday at 8pm.

Hina first appeared on screen as a TV talk show host in “Andaz Apna Apna”. She later hosted “Batain Mulaqatain” and also “Uljhan Suljhan”. “The shows were not frivolous,” says Hina. “They had elements of seriousness attached to them.” Hina continued her work as a host, despite the unsupportive attitude of her conservative family, until actor-producer Abdullah Kadwani offered her a role in a play. At first, she refused, saying she could not act. Later, however, she took the plunge and gave her acting skills a chance. “My life was best when I was hosting talk shows. I was bringing forth knowledge that is missing today,” says Hina, as she recalls the days of her live and recorded shows. “There is a vacuum [in society]; what we see today on shows are pure cat-fights or mud-slinging — nothing meaningful.”

Hina took the leap, and it has turned out to be a favourable one; she has not been cast in some of today’s leading TV shows. About her recent role as Zarina in the widely popular “Humsafar,” Hina says the opportunity was “one in a million”.  For “Talkhiyan”, Hina says her character Appu is a witch.

“It is a stand-alone character,” she says, referring to Appu. “The ‘Humsafar’ mommy made the world cry for her fate. Now, I will play a wicked woman who audiences will hate me for,” she adds. “From my expressions to connections, everything I do in the character is a result of sheer hatred.”

Hina is not afraid to admit that she approached the director of “Talkhiyan” herself after going through the script that had been given to her niece Mehak Khan, who is playing the role of Zoya. “What a splendid storyline, I thought. The director called me two days after I approached him for the play,” she says confidently. “It was a spontaneous decision, since when I had spoken to Khalid Ahmed, he hadn’t give me a definite yes.”

Hina is eager to see how the audience will react to her role as a monster. “The intense relationship between Zoya and Appu is one of hatred, which is brilliantly played on screen.”

Bubbly Sanam Saeed loves to talk and she has a lot to say about “Talkhiyan”.

“The God of Small Things is one of my favourite novels. I liked it and I believe I can relate it to the context,” she says. “When I read the script, I had no second thoughts. The writer Bee Gul did a beautiful job with Roy’s words.”

Before shooting the drama serial, Sanam admits she was nervous about who the other characters would be and how well she would perform with them. She now describes the working chemistry as “amazing”.

She says that even though “Talkhiyan” will be running simultaneously with her other drama, Hum TV’s “Zindagi Gulzar Hai”, they are completely different plays.

“‘Zindagi Gulzar Hai’ is a commercial drama, whereas ‘Talkhiyan’ is more of an art film. There is attention to detail and to the treatment of the film,” she says.

However, if she had to choose to work opposite either Fawad Khan or Adnan Jafar (who plays the lead male role in “Talkhiyan”), Sanam says it would have to be Fawad. “I feel I bounce off with Fawad Khan. Adnan is a very private actor, he acts in himself,” she says.  “There is some kind of chemistry between Fawad and I on screen — so definitely him.”

She says that Bibi is a role of a lifetime which she is lucky to be playing. “My character [Bibi] stands up as an independent woman who has empowered herself,” says Sanam.

Years ago, Sanam started off with stage performances; since then, she was convinced that acting is her first love. “Theatre excites me. I am very confident while doing stage plays but I am camera shy for television,” she admits.

Mehak Khan  earned the role of Zoya after a performance in front of the director. She recited poetry by Ghalib, as well as Sahir Ludhianvi’s “Taj Mahal”, which impressed Khalid Ahmad enough to cast her. She may be Hina’s niece in reality, but on screen, the two share much hatred.

Mehak is not a big fan of Roy’s novel, as she describes it as being “a little dry”. “The script written for the play, however, has been adapted so well,” she adds, praising the writer. “It has complemented it in a better manner.”

“The character touched my heart,” says Mehak. “It became easy to let go of myself and see it all through Zoya’s eyes. I could emote accordingly and I cried from the core of my heart.” Mehak is certain that no other role that she does in the future can come close to the one in “Talkhiyan”. “It raises the standards so high. I don’t believe I will ever do an intense role like this,” she says.

“Zoya is the only one who understands her mother’s pain. She is an innocent, lively child who grew up to be a bitter girl,” says Mehak, as she continues to talk about the family’s sour experiences.

Mehak comments on Sanam Saeed’s role as Bibi. “It wasn’t Sanam, it was definitely Bibi that made me cry.”