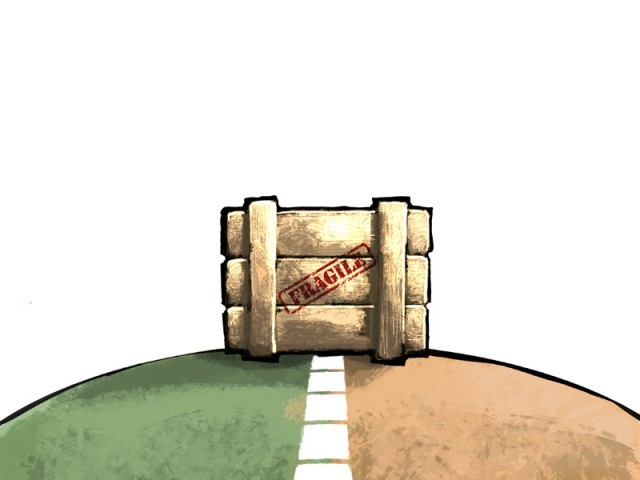 Pakistan’s trade imbalance in India’s favour increased from 80:20 to 85:15 over the last year. ILLUSTRATION: JAMAL KHURSHID.

LAHORE: Not pleased with trade liberalisation with India, farmers ask the government to provide them subsidy or impose a tax on agricultural imports from India to ensure a level playing field.

Their demands include a Rs12,000 per acre subsidy to growers on various agricultural inputs or a Rs400 per 40 kilogramme regulatory import duty on highly subsidised Indian agriculture imports.

“We can produce abundant vegetables, fruits and other produces if prices of inputs including fertiliser, diesel and electricity are brought at par with Indian levels,” said representatives of farmers on Wednesday while adopting a joint resolution at an event on ‘Farmer’s perspective on Pakistan India trade liberalisation’, held under the aegis of Agricultural Journalists Association (AJA).

The recent cotton export restrictions, cement import impediments and other tariff and non-tariff barriers by India protected its agriculture and industry. Pakistan’s trade imbalance in India’s favour increased from 80:20 to 85:15 over the last year.

During June 2011 to June 2012, Pakistan’s imports from India were valued at Rs134.7 billion (1.44% of total exports), whereas exports to India amounted to Rs30.3 billion (3.36% of total imports), according to latest figures available on Pakistan Bureau of Statistics’ website.

Farmers were generally in favour of trade with India; however they were of the view that dynamics of the farming sectors of both countries should be examined before fully opening trade doors.

The joint resolution warned the government that agriculture was the livelihood of 65% of the Pakistani population and imbalance in trade with India will mean suffering for country’s economy and depriving people of their livelihood.

They asked authorities concerned to devise a separate trade policy for agriculture produces after consulting with representatives of farmers’ organisation.

Speaking on the occasion, Dr Tariq Bucha, president of Farmers Associates Pakistan said interest of the agriculture and related sectors were not taken into consideration before taking trade related decision. “Decisions are being taken in a hurry by the government, leaving many critical questions unanswered as there is a visible negative impact on Pakistan’s agriculture sector if free trade initiative is completed.”

Ibrahim Mughal, another agriculturist, said Pakistani vegetable growers will have to pay additional Rs63 billion because of high input costs to compete with Indian vegetables.

India gives Rs1.1 billion as subsidy to its agriculture sector annually in addition to Rs0.367 billion as food subsidy. Pakistan can only allocate subsidy to its sector by diverting from other state-owned enterprises, projects and other sectors of the economy.

Abdul Basit, former chairman of the Poultry Association of Pakistan said, “We have already lost market of Afghanistan due to contrasting cost of production.”

Former food minister Hussain Jahania Gardezi said cotton production has stalled due to various factors including low quality seed, whereas India managed to double its production. “We cannot ignore interests of farmers while opening trade with India,” he observed.

The secretary of the Ministry of Commerce, he claimed, was recently caught off guard during a presentation to the Standing Committee of the Senate on Foreign Affairs, and later at the meeting of the Public Accounts Committee, when asked to show any record of consultation with farmers before entering into a dialogue on the issue with India.