PML-N chief says the SPLGA will divide the provin­ce, but the people of Sindh will resist it.
By Web Desk
Published: December 5, 2012
Tweet Email 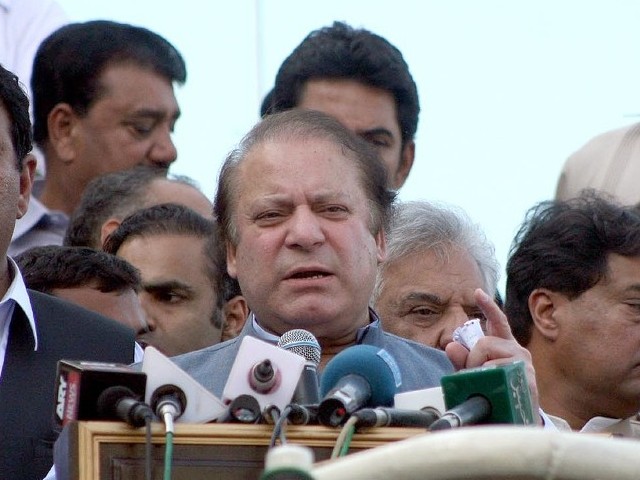 PML-N chief says SC named all political parties who have militant wings in Karahci, and these parties are sitting in the government. PHOTO: INP/FILE

RAIWIND: Pakistan Muslim League-Nawaz (PML-N) chief Nawaz Sharif on Wednesday ruled out the construction of the controversial Kalabagh dam till all provinces agree to its construction, Express News reported.

“If two provinces want it and two do not want it, then how can it be made,” Nawaz told reporters in Raiwind.

Noting how the recently passed Sindh Peoples Local Government Act had created a political storm in Sindh, Nawaz said that the law “is an act of dividing Sindh.”

“The people of Sindh will never accept this [SPLGA],” the PML-N chief said before adding that his party too had rejected the act.

Nawaz added that people of Sindh are looking for an alternative leadership since they did not get anything under the current regime. “There are no jobs, no merit system there, its a rule of tyranny.”

Referring to the observations made by the Supreme Court in the Karachi violence case, Nawaz said that political parties in Karachi maintained armed militant wings.

“The supreme court named these parties and they are sitting in the government there.”