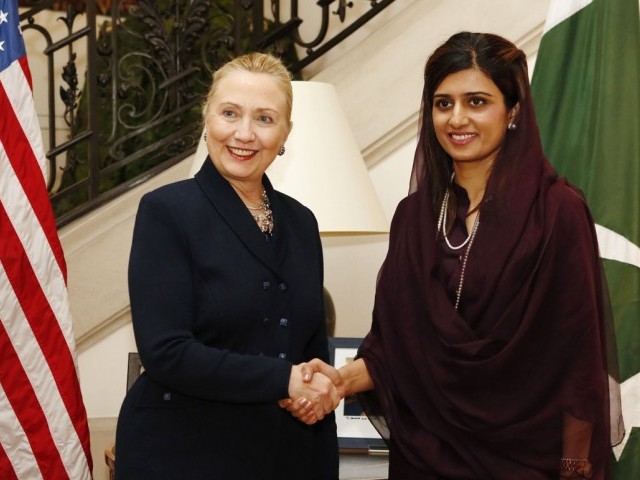 “As part of their regular series of consultations, Secretary Clinton and Pakistani Foreign Minister Khar and their delegations reviewed the progress in US-Pakistani relations in 2012 based on their commitment to identify shared interests and act on them jointly,” said a readout provided by a senior State Department official late on Monday.

Meeting on the sidelines of the Foreign Ministerial meetings at the North Atlantic Council in Brussels on Monday, the two leader reviewed progress in their countries’ relations based on “their commitment to identify shared interests and act on them jointly.”

The State Department official said that Secretary Clinton and FM Khar discussed cooperation in counter-terrorism, support for the Afghan-led peace process and the transition in Afghanistan in 2014.

The official said that the two also discussed “the need to move the US-Pakistan economic agenda from aid to trade, emphasising market access and investment.”

The official said that both countries will continue these engagement in the weeks and months ahead.

Prior to her meeting with Secretary of State, Khar met with EU High Representative for Foreign Affairs and Security Policy Lady Catherine Ashton in Brussels, a foreign ministry release read.

The Foreign Minister said that Pakistan attached high importance to its relations with the European Union in all spheres. She noted that the commencement of Pakistan-EU Strategic Dialogue and 5-year Engagement Plan were important landmarks in Pakistan’s growing relations with the EU and underlined the importance of institutionalising Summit-level meetings to sustain the upward trajectory.

Khar thanked the EU for granting Autonomous Trade Preferences (ATPs) to Pakistan and hoped that the new GSP+ scheme would also accommodate Pakistan when it enters into force from January 1, 2014.

The foreign minister briefed the High Representative about the situation in Afghanistan and the efforts Pakistan was making to facilitate an Afghan-led and Afghan-owned reconciliation process. She also elaborated on the steps Pakistan government had taken for the promotion and protection of human rights in the country with particular focus on women, children and minority groups.

Lady Ashton said that the EU regarded Pakistan as a significant country in the region and appreciated the role it was playing for peace and stability in the region. While recognising the various legislations Pakistan had adopted regarding human rights, Lady Ashton hoped that Pakistan would continue to make all efforts to provide additional safeguard in this regard.