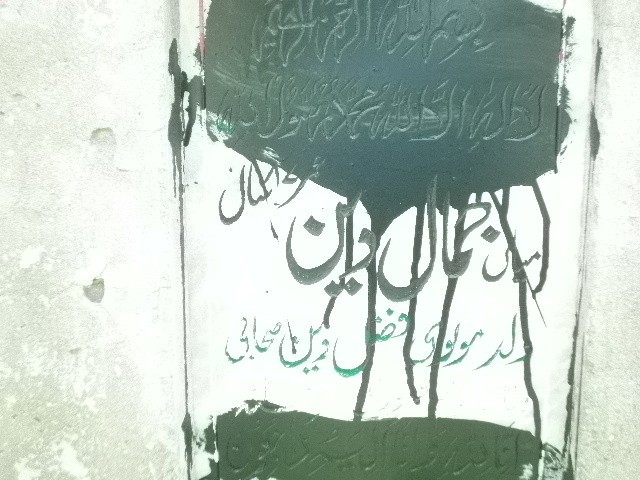 The vandals told the caretakers that Ahmadis, being non-Muslims, were not allowed to write the Kalima or Bismillah on their tombstones. PHOTO: SHAMSUL ISLAM

Over 100 tombstones were vandalised by masked men at a graveyard of the Ahmadiyya community in an upscale neighbourhood of the city Monday morning.

Twelve to 15 men, carrying arms and digging tolls, entered the graveyard in Model Town, Q Block, between 1:30am and 1:45am and smashed tombstones of the graves, according to witnesses.

The vandals told the caretakers that Ahmadis, being non-Muslims, were not allowed to write the Kalima or Bismillah on their tombstones.

“I was about to take a nap when I heard someone jumping into the graveyard. As I stepped out to inquire, armed men pounced on me. They snatched my gun and roughed me up,” Muhammad Younis, a guard at the graveyard, told The Express Tribune.

The armed men tied around 20 people – including visitors and families of the caretakers and the guard – with ropes and locked them up in the living quarters of the graveyard before starting vandalism.

They were speaking Punjabi and Urdu. However, their “leader”, a long-haired and bearded man, had traces of Pashto in his accent, witnesses said. They told the caretakers and guards that they belonged to a banned organisation and the Taliban.

According to witnesses, the whole vandalism episode lasted for about 35 minutes. The vandals ran away when a policeman from the Ahmadiyya community and a guard at one of their worship places arrived and fired gunshots into the air. The community members said they would file a case.

Surprisingly, the SHO of Liaquatabad police station said he was not aware of any such incident. “I will send someone to look into this, when I get a call,” SHO Idrees Qureshi told The Express Tribune.

Ahmadiyya community spokesperson Saleemuddin said, “This is not some obscure village in Hafizabad, this is Lahore and the neighbourhood where the Sharif family lives. How is such an incident allowed to take place here?”

In July, 2012, Tufail Raza of the Khatme Nabuwwat Lawyers Forum had approached the Liaquatabad police station seeking removal of Islamic inscriptions from tombstones at the Ahmadi graveyard, which was established in 1980. The police did not follow up on the application, but allegedly began pressuring the community to remove the text.

In October, the additional district and sessions judge had  disposed of Raza’s petition, asking the police to act in accordance with the law.

The Human Rights Commission of Pakistan (HRCP), meanwhile, condemned the incident and demanded the alleged vandals to be brought to book.

“Last night’s attack is shocking because it did not occur in a remote village but in the heart of the country’s second largest city. The attackers’ success in overpowering several persons at the graveyard and completing the destruction in half an hour shows that the incident was well-planned,” it said in a statement.