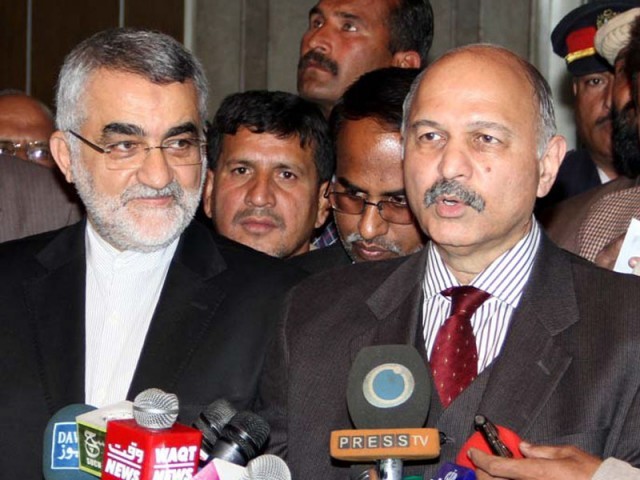 ISLAMABAD: The Chairman of the Parliamentary standing committee on defence Mushahid Hussain has slammed the dual standards on nuclear issues and strongly feels that the standoff with Iran on the nuclear issue should be resolved peacefully, without threat or use of force.

Speaking to the media after holding a meeting with the visiting delegation from Iran’s Parliament and Foreign Affairs Committee headed by Alaeddin Borojourdi. Hussain said that Pakistan and Iran have agreed to enhance mutual consultation and cooperation in the context of changes in the region, particularly Afghanistan which will affect both neighbours.

The Chairman, Senate Defence and Defence Production Committee said that the two committees had formal discussions at the Parliament House during which they exchanged views on Pakistan-Iran relations particularly the gas pipeline, Afghanistan, Muslim unity and the Iran nuclear programme.

Both sides also agreed on the necessity of enhancing cooperation between the Defence Ministries of both countries.

Senator Mushahid Hussain thanked Iran for its generous support to Pakistan during times of trouble, particularly when Pakistan faced pressures as well as during recent floods in Sindh.

The committee chairman said that Pakistan has no fundamental conflict of interests and that the entire Pakistani nation was committed to building the energy pipeline with Iran since it is a pipeline of peace and prosperity for the region.

The Senate Defence Committee of Pakistan supported the right of Iran to undertake nuclear research and enrichment for peaceful purposes in accordance with IAEA safeguards.

Borojourdi clearly stated that Iran has no intention of building the atomic bomb but it will certainly exercise its right to do nuclear research and development for peaceful purposes.

The Iranian parliamentarian also stated that his country was committed to the energy pipeline with Pakistan and also offered to help support the construction of the pipeline in Pakistan as well, since, he said that the pipeline from the Iranian side was almost complete and there would be important development on this issue when President Zardari will visit Tehran on December 7.

Keeping a check on women