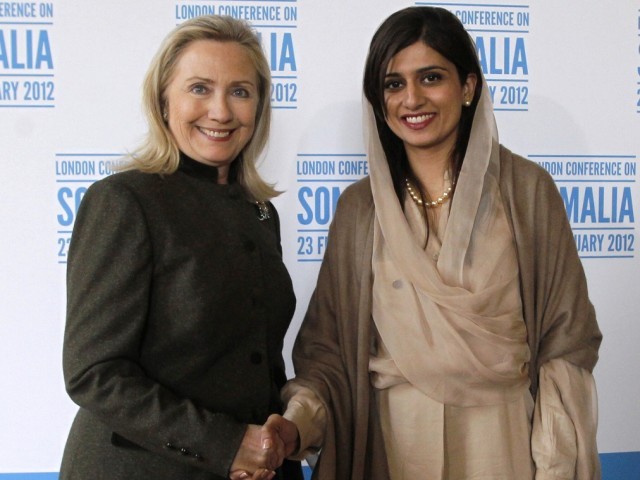 Clinton will seek to encourage an improving mood between Pakistan and Afghanistan. PHOTO: REUTERS/FILE

US officials say she will seek to encourage what Washington sees as an improving mood between Pakistan and its neighbour Afghanistan, where US-led forces are seeking to extricate themselves from a long and bloody war.

A second US official pointed to better signs since Washington’s ties with Islamabad hit a low in 2011 after US forces killed al Qaeda leader Osama bin Laden while he was hiding in Abbottabad.

He noted exchanges of high-level visits between Pakistan and Afghanistan, where NATO still has a large multi-national force that is due to end its combat operations in 2014, and Pakistan’s release of Taliban prisoners as requested by the Afghans to help smooth the way for peace talks with the group.

“I think the Pakistanis are actually pressing forward (on improving relations) because, like a lot of people in the region, they recognise that 2014 is not so far away,” he said.

As well as discussions on security, the United States had made efforts to expand the economic relationship with Pakistan and this was an issue expected to come up in Monday’s talks.

Clinton hopes NATO allies will reach a deal this week on stationing Patriot missiles in Turkey to defend against possible Syrian attacks, senior US officials said.

The 28 NATO allies meet in Brussels on Tuesday and Wednesday.

Turkey, which has made a formal request to NATO to help it bolster its air defences, is a big supporter of rebels fighting to oust Syria’s President Bashar al-Assad.

It has repeatedly scrambled jets along the countries’ joint border and responded in kind when shells from the conflict have landed inside Turkey, underlining fears Syria’s 20-month-old revolt could spread to destabilise the region.

“We’re all positively considering (the request),” a senior State Department official said, briefing reporters en route to Europe, where Clinton started a regional trip with a stop in Prague.

The official said he did not expect final details this week on the numbers of missiles that would be deployed, or on where or for how long, as site surveys were still going on.

He also said it would also probably be “at least a matter of weeks” before deployment, as national decisions still had to be made and site surveys completed and agreed.

Russia, which will join the NATO meeting, has been at odds with the alliance over how to end the Syrian conflict. Russia has vetoed UN resolutions aimed at pressuring Assad to step down and Moscow’s foreign minister, Sergei Lavrov, is expected to raise concerns over the missile deployment plans.

The State Department official said the deployment would not be part of “an inexorable move towards a no-fly zone” over Syria of the sort NATO mounted to defend anti-government rebels in Libya.

The official also rejected the idea that deployment of Patriots in Turkey would create a de-facto safe haven in Syria’s border area with Turkey, as the missiles would be used to defend against planes or missiles that crossed into Turkish airspace.

The possibility of establishing a no-fly zone is expected to be discussed at a meeting of the Friends of Syria group in  Marrakech next week.

“We’re always prepared – and the Secretary has made that clear – to look at ways in which we can help the people of Syria,” the official said. “But …a no-fly zone is not on the agenda of any NATO talks this week.”

France, Britain, Turkey and Gulf Arab states have already recognised a rebel coalition as the legitimate representative of the Syrian people. The United States has been more cautious and not offered full recognition, or arms the rebels are seeking.