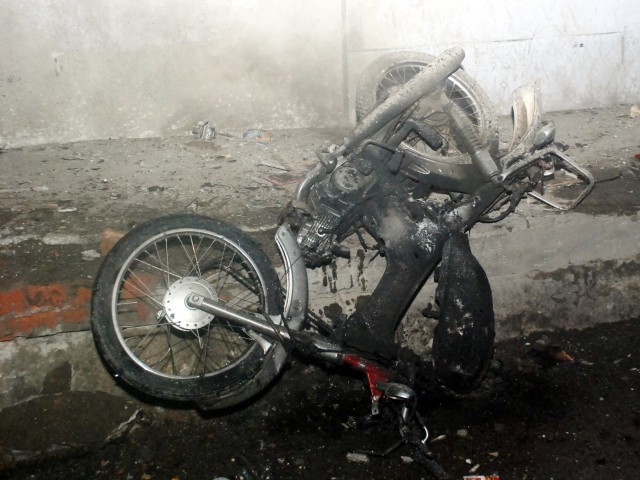 Police said that the suicide bomber and his aide were riding the motorbike when the jacket detonated prematurely. PHOTO: IQBAL HAIDER/EXPRESS/ FILE

PESHAWAR: A suicide bomber and his facilitator were killed when his suicide vest went off prematurely in Jaba Sohail near Yaktot late on Saturday night.

Initially it was thought the blast had occurred in the motorcycle but after police inspected the site they discovered that the man who had been killed in the blast was wearing a suicide vest. His helper was also found dead nearby.

The in-charge of Wazir Bagh police post, sub-inspector Sartaj Khan told The Express Tribune that contrary to initial reports which indicated that the blast occurred in the motorbike, it was suicide bomber who’s explosive laden jacket blew up killing him and his aide. “The bomber was riding a bike and perhaps his jacket went off accidently which left him dead on the spot and also destroyed the motorbike,” he explained.

Khan said that they had called in the Bomb Disposal Squad (BDS) who would inspect the site of the explosion as well as the body parts of the suicide bomber.

“We don’t know about the target and what was the suicide bomber and his helper were doing in the cold night in such a deserted place as it is the back of a patrol pump and quite deserted,” he explained.

Earlier the powerful explosion sent a shock wave of fear across the city. The place of the explosion was located after a good 30 minutes search by the police along the Ring Road.

Party politics: Jhagra being wooed by both ANP, PPP