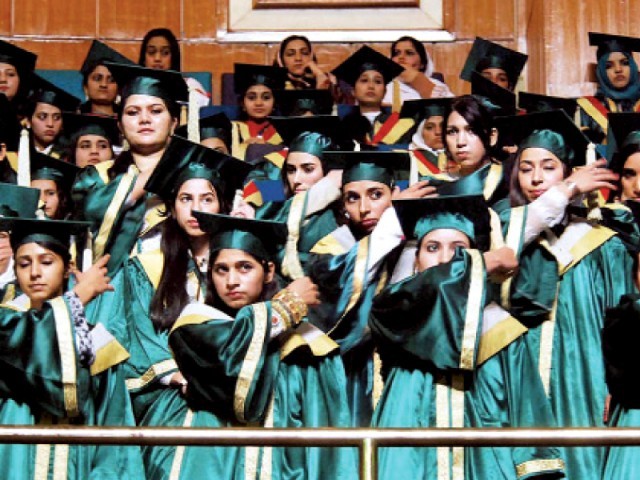 Graduates of FJWU pose for a picture. PHOTO: APP

A total of 1,042 students were awarded degrees during the twelfth convocation of Fatima Jinnah Women University (FJWU) at Jinnah Convention Centre on Friday.

The graduating batch comprises 639 undergraduate, 393 graduate, nine M Phil students and one PhD scholar. The chancellor conferred the degrees on the graduating students and awarded 33 gold and 33 silver medals to position holders in each department.

The prime minister, in his speech, appreciated the students’ hard work and said that the foremost responsibility of a university is to produce well-informed and motivated citizens. “Universities should play a positive role in developing the minds of the younger generation so that the country can see the potential for growth and progress translate into reality,” he said. He also assured of his support for the construction of FJWU’s new campus.

Earlier on Thursday, FJWU Vice Chancellor Dr Samina Amin Qadir, while talking to media persons, said 95% of the work on the new campus’s boundary wall has been completed.

However, she said the funds promised by the Punjab government and Higher Education Commission for the construction of the building had not been released so far. “The university, being an autonomous body, has to bear all its expenditure itself, and the system has been running successfully without any raise in tuition fee,” she said.

She said the university will start an undergraduate programme in Urdu literature, and a hostel building to accommodate 631 students would be completed next year. For this purpose, the Punjab chief minister has pledged Rs220 million, out of which Rs50 million have been released so far, she added.