Autumn glory: Chrysanthemums give autumn its colours at flower show

Autumn glory: Chrysanthemums give autumn its colours at flower show 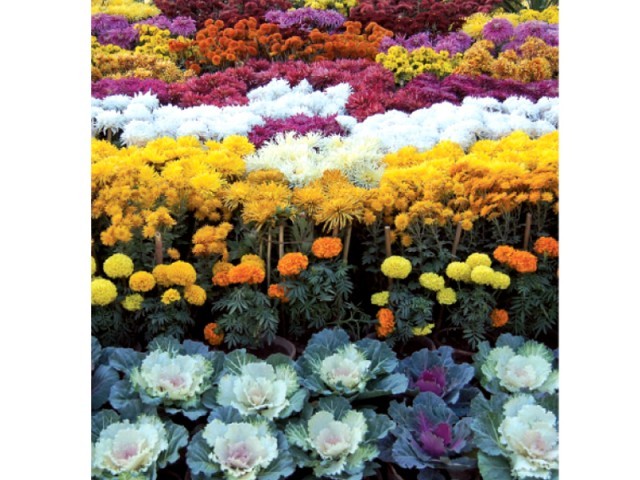 An assortment of flowers on display at the show. PHOTO: MUHAMMAD JAVAID/EXPRESS

For less than two months a year, during the dry winter spell, a flower blooms in the cold, politicking heart of the federal capital.

The chrysanthemums, whose origin is traced back to ancient China, are on display in full glory at a three-day flower show inaugurated at the Rose and Jasmine Garden on Friday.

Islamabad Horticulture Society (IHS) President Javed Iqbal said around 100 varieties of flowers are on display at the Chrysanthemum and Autumn Flowers Show.

Some 20 organisations are participating in the show. These have been divided into small, medium and large categories depending upon the number of gardeners employed, he added. The participating organisations include Public Works Department (PWD), Capital Development Authority (CDA), Allama Iqbal Open University and the Islamabad Club.

The chrysanthemum is a composite flower with ray florets. Some varieties resemble sea anemones, others look like large snowballs.

On Friday, the flowers, arranged on either side of a winding pathway, attracted a large number of visitors.

Mubashir Ali, a small businessman, who was touring the flower show with his wife and daughter, said the flower show had uplifted his spirits. “Looking at such beautiful flowers refreshes the mind,” he added.

Humera Naz, a housewife, said she and her family occasionally visit the Rose and Jasmine Garden and the flower show was a welcome addition. “I’m impressed by the flowers on display.”

Muhammad Akmal, a gardener with the PWD, one of the participating organisations, explained that growing chrysanthemums is a year-long activity, which begins around the end of December. He added some of the flower displays at the show took around two days to set up.

CDA Environment Member Kazim Niaz said the environment wing is planning several activities for the people over the next month, some of them centred around the hiking trails on Margalla Hills and the Marghazar.

A judging panel gave points to the flower displays of each participating organisation based on the number of flowers in a pot, the visual aesthetics of the display, the quality of the flowers and diversity of flowers in a single display. The results of the show were still being compiled by the time of filing this report.

The show was inaugurated by CDA Chairman Tahir Shahbaz. The show has been organised by IHS in collaboration with CDA. The IHS holds two flower shows annually.