Faridi used to think HIV/AIDS was a mortal sin. But today, he educat­es thousa­nds about the diseas­e.
By AFP
Published: November 30, 2012
Tweet Email 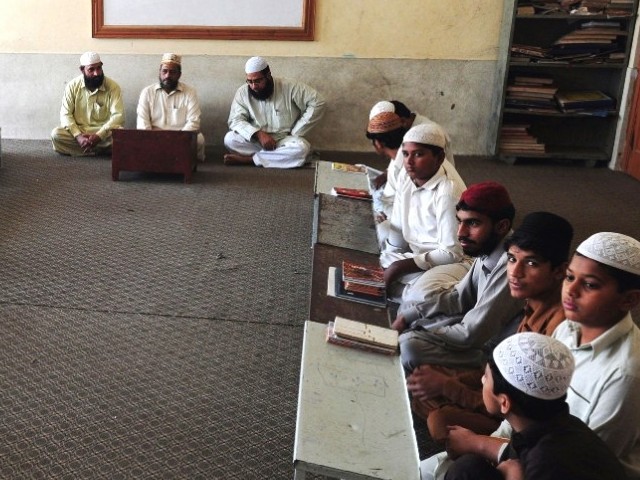 In this photograph taken on November 29, 2012, cleric Abdul Khaliq Faridi (C) briefs about HIV/AIDS to students at a seminary in Karachi. PHOTO: AFP

KARACHI: Cleric Abdul Khaliq Faridi used to think HIV/AIDS was a mortal sin. But today, he educates thousands about a disease that is on the rise in the country.

He was among the first recruited into a government-backed project to raise awareness by harnessing the influence of clerics in Pakistani society and change the common perception that HIV/AIDS occurred as a result of depravity.

With hundreds of worshippers at his mosque, more than 1,000 pupils at his madrassa and hundreds of others he reaches as a visiting preacher, his is a receptive audience that few non-clerics can dream of.

“At first, most people were shy and some were even offended, but now they listen carefully. People have started thinking of AIDS as one of many deadly diseases instead of as a cardinal sin,” Faridi told AFP.

He is the chief cleric at the Jamia Sattaria mosque and seminary in Karachi, a city of 18 million which has probably the highest concentration of the country’s more than 100,000 estimated HIV/AIDS sufferers.

“The Friday sermon is the greatest forum we have. People come to pray in huge numbers, thus educating them about AIDS on that platform is highly effective,” said Faridi.

He is one of more than 2,500 religious leaders now engaged by the AIDS Control Programme, sponsored by the government of Sindh to build awareness about HIV/AIDS.

Faridi says two years ago he thought the disease was a mortal sin, the product of improper sexual relations. But that all that changed when he met those involved in the programme.

“I was a bit reluctant as I thought it would make me complicit in a big sin, but I was curious and decided to attend a briefing,” he said.

It changed Faridi’s mind and now he is helping to change the perception among a large number of Pakistanis who still think AIDS infects only those involved in illicit or gay sexual relations.

“I tell people that AIDS victims are not sinners but suffer from a disease like any other people who suffer from other kinds of diseases,” said Faridi.

Khan said that the awareness preached by clerics and community leaders has made people less reluctant to take HIV tests.

“The number of registered HIV/AIDS patients has doubled in the last two years… Our efforts are paying dividends,” Khan said.

Pakistan’s National AIDS Control Programme (NACP) says the country is moving from a low prevalence, high risk country to one with a “concentrated epidemic”.

It says infection rates among intravenous drug users increased from 10.8 percent to nearly 21 percent in the last four years, and that HIV also appears to be establishing itself in “other key populations as well”.

Although 97 percent of Pakistanis are Muslim, the programme also involves religious leaders from minority Christian, Hindu and Sikh communities.

Pundit Shaamlal Sharma, a Hindu cleric in southern district Shikarpur, said he was proud to be part of the campaign and that everyone should take part.

“It is for the betterment of humanity and a huge step towards making Pakistan an AIDS-free society,” he said by telephone.

Abdul Latif, a 43-year-old father of four who tested positive for HIV eight years ago after returning from the Gulf, also said attitudes are changing.

“I initially thought I was about to die, but then good doctors and good preachers made me believe I could lead a normal life with treatment,” Latif said.

“Initially I wouldn’t dare tell others about my disease, but now it is not as difficult for me, my wife and family to lead a peaceful life without hiding it from others. More and more people are now treating it as any other disease.”