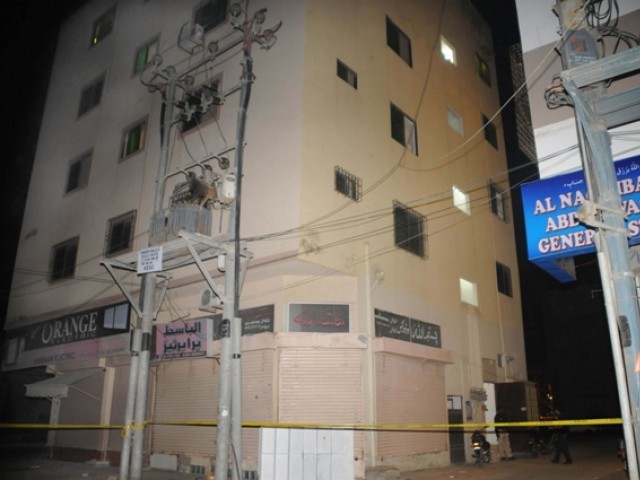 DHA, CBC shut down the estate agent’s office who rented out the apartment. PHOTO: MOHAMMAD NOMAN

If it was not for the high security alert on the ninth of Muharram, no one would have even noticed a small explosion in a DHA flat last Saturday. Within minutes police had surrounded it, fearing terrorists were inside. But instead of bombs, they found a makeshift lab to make methamphetamine drug, commonly referred to as crystal meth.

This is perhaps the first time a gang has been busted that locally made the addictive psycho-stimulant and enjoys a clientele among the children of some of the richest people in Karachi, according to police investigation.

“It was easy for these criminals to make crystal meth,” said DSP Zameer Abbasi, one of the officers working on the case. “They used readily available chemicals and washroom cleaning agents.”

Crystal meth, which can make a person hyperactive, has been easily available in the city along with cocaine, ecstasy and heroin. However, this is the first time that a laboratory has been traced, confirmed Pakistan Customs’ spokesperson Qamar Thello.

The drug was being prepared on the third floor of a residential building (23-C) in the Bukhari commercial area. After the blast at around 9:20 pm on Saturday, a neighbour informed DHA’s control room. The police was called and when they reached the apartment, they found plastic drums filled with chemicals, broken glass jars and blood.

Investigations revealed that four men along with a six-year-old girl had moved into the rented apartment only two weeks before they were busted. The tenant, Mansoor, and his brother-in-law, Haji Daud, were arrested and have confessed, while their two Iranian accomplices have escaped.

“These criminals were well trained. They used iodine, calcium carbonate, sodium chloride, bleach, methanol and caustic soda to make the drug. Everything is put together in fixed quantities in a heating and purification process that only these people know about,” said Zameer.  “We have been told that the Iranian guys received training in Malaysia on how to make this drug using off-the-shelf chemical products,” said the DSP, insisting that the accused could be members of an international cartel. “The accused men say some of the drug was also being exported to Iran.”

The gang had operated in DHA for months, changing residences frequently and preferring flats in commercial areas, Zameer said.

“DHA has become a convenient place to operate a narcotics business. The men were never noticed taking chemical drums upstairs. Neighbours don’t bother about each other here.”

Police have recovered cell phones from the arrested men but it is still unclear if the scope of the investigations will be broadened by going after the clients – mostly young men from DHA, who get in touch with the peddlers through word of mouth.

The investigations have been handed over to the Crime Investigation Department (CID) but its DIG Kamran Afazal said that it was premature to say anything about the case.

The flat was rented out by Shah’s Estate, which is owned by Saqib Shah. DHA has sealed the agency and blacklisted the owner on grounds that he did not bother to check the credentials of the tenants or shared their details with the police.

“This incident was bound to happen,” said a senior DHA official. “The perception that well-to-do and educated people live here makes this a perfect hideout for criminals who want least attention.”

DHA has asked the Cantonment Board Clifton (CBC) to make it mandatory for estate agents to communicate all information of the owners and tenants to the police before completing transactions related to any house or flat.

Under its bylaws, the CBC has the powers to cancel the trade licences of the agents who do not comply with its instructions. To stop estate dealers based in other parts of the city, it has been proposed that only registered dealers will be allowed in DHA.

‘Sewing’ the seeds to empower women