Pakistani fish seller’s song a hit on the web

Pakistani fish seller’s song a hit on the web 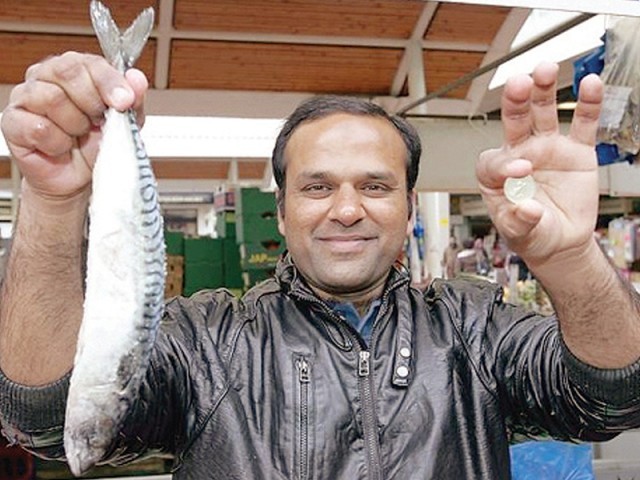 Nazir’s song led him to audition on the UK version of “The X-Factor”. PHOTO: FILE

LONDON: A 31-year-old Pakistani fish seller at a London market seems like an unlikely pop star. But the moment he starts to sing his “One Pound Fish Song”, he is suddenly surrounded by a sea of fans.

Muhammad Shahid Nazir, who is known by his web fans as the “One Pound Fish Man”, has been signed by Warner Music, who is planning to release his song as a single on December 9, The Sun reported.

Nazir came into the spotlight after a YouTube video of him singing at the Queen’s Market, Upton Park, received more than 3.6 million views. The video catapulted Nazir into the spotlight and led him to audition on the UK version of “The X-Factor”, where he was eliminated.

British star Alesha Dixon and US boy band Mindless Behaviour have both recorded versions of the song.

Nazir said the attention is not unusual. “People have come from Australia, the US, Canada and all over Europe. They don’t come here to work or shop, they come for the One Pound Fish Man,” he added.

Nazir moved to Britain just over a year ago with the hope of making enough money to send to his wife and kids in Pakistan.

On his first day at the fish stall, his boss told him to shout in order to get the attention of his customers. He refused and ended up making a song instead.