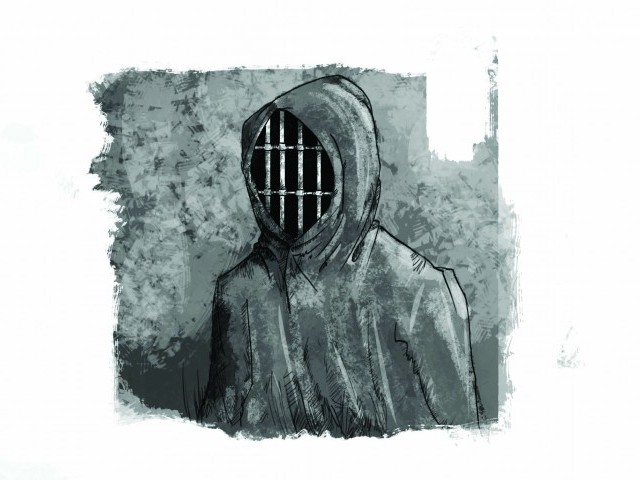 The suspects were planning on carrying a series of six attacks on mourners, police and the media. ILLUSTRATION: JAMAL KHURSHID

KARACHI: The city narrowly escaped a major bomb blast on Ashura when the Crime Investigation Department’s (CID) team busted a group of terrorists before they could make their way to the main procession route on MA Jinnah Road.

On Sunday, CID’s team killed a suspected suicide bomber and arrested his accomplice from Manghopir. They also seized an explosive-laden car.

CID Anti Extremist Cell chief SSP Chaudhry Aslam Khan said that the team raided Sultanabad in Manghopir on a tipoff. As soon as they neared the suspects’ hideout, the alleged terrorists started firing at the police.

In the following exchange of fire, one of the suspects, Gul Muhammad Mehsud, was killed and Ataullah alias Saddam was arrested, while the remaining suspects managed to escape.

The explosives were ready to go off, they just needed the push of a button, SSP Khan said. “If we were even a few minutes late, the terrorists would have managed to set off the bomb,” he said, adding that hundreds of lives would have been lost and it would have worsened the law and order situation.

According to SSP Khan, the explosives contained ball bearings, nut bolts and, for the first time, they found iron pieces. “The iron pieces were like bullets for a 9mm pistol, only more dangerous,” he said.

The deceased suspect hailed from Waziristan and lived in Sultanabad in Manghopir. The arrested suspect was Burmese who currently lives in Gulistan-e-Jauhar, but had lived in Orangi Town and Korangi also. “[Ataullah] is a Quran hafiz and a student of a madressa while his father and brother are also teaching at different seminaries.” SSP Khan admitted that the police are trying to figure out “how the Burmese and Mehsuds are connected”.

A few years ago, the suicide bomber, who was involved in the attack on Shia leader Allama Hassan Turabi in Abbas Town, was also Burmese.

The suspects belong to the banned organisation, Lashkar-e-Jhangvi, and have links to the outlawed Tehrik-e-Taliban Pakistan’s Karachi chapter chief Sher Khan Mehsud. “We also have strong evidence that this group, especially the arrested suspect, was the mastermind behind the bomb blasts in Abbas Town and Orangi Town,” said SSP Khan. “They were planning on carrying out six blasts, one after the other, to not only target the mourners but also law enforcers and media personnel.”

SSP Khan further said that the arrested terrorist was being interrogated and the police are hopeful that they will catch the whole gang very soon. He added that the police are trying to determine the group’s involvement in the attack on the Rangers complex.

At a press conference on Sunday, Sindh Inspector General of Police Fayyaz Leghari said that there were terrorism threats during Ashura but the terrorists could not do anything due to police performance. “All the credit goes to the policemen who worked day and night and saved Karachi from a big disaster,” he said, adding that all these law enforcers deserve appreciation.

According to Leghari, the police department is planning to buy 500 police vans with cameras. Half of these will be for Karachi and the remaining ones will be distributed across the province, he added.