Cowasjee’s battle for Karachi will go on

Cowasjee’s battle for Karachi will go on 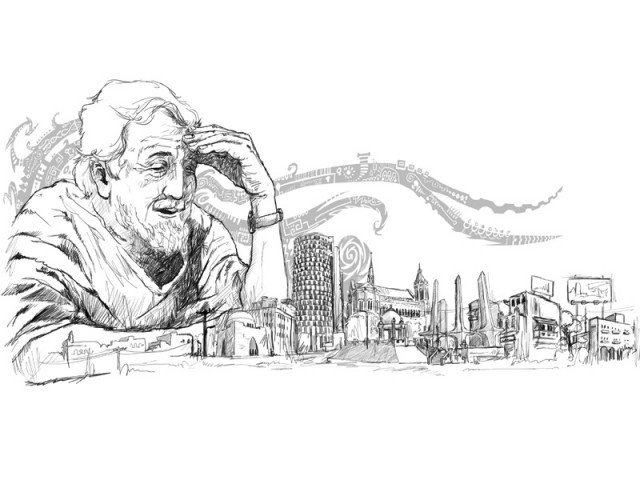 Champion of the city’s environment, Ardeshir Cowasjee was a regular on court roster. ILLUSTRATION: JAMAL KHURSHID

KARACHI: An old, beautiful tree looms in front of the Cowasjee residence in Bath Island, hiding the house from the street. Most people would have cut that tree down.

Not Ardeshir Cowasjee, the legendary Dawn columnist and activist, who died on Saturday.

The champion of Karachi’s environment and its landscape – among other causes that he espoused and rallied for in his weekly acerbic columns – was a regular fixture in the Sindh High Court’s roster.

Cowasjee was the pioneer of public-interest litigation that now dominates headlines.

His father Barrister Naimur Rahman represented the late Cowasjee in the Costa Livina case, which involved a number of influential people trying to take over a portion of Bagh Ibn-e-Qasim. “Previously a person had to be personally aggrieved in a case,” Rahman said. “But in this case, it was held, once and for all, that any person can petition the court in the public interest.”

“This was the case that opened the doors for public-interest litigation.”

In a 2010 column, Cowasjee described this case as a ‘partial success story’, which involved a commercial plot from the Bagh Ibn-e-Qasim land, and eventually being allotted to build a high-rise commercial and residential complex. After its conversion was successfully challenged, the builders managed to get stay orders and eventually the skeleton of their building was regularised by the Karachi Building Control Authority.

Through Cowasjee’s litigation, illegal construction was stopped, rules were enforced and allotments were cancelled. In the Glass Towers case, the Supreme Court ruled that the part of the building that had been constructed beyond the ‘cut line’ of the plot, and should be demolished.

There are currently 30 to 40 cases still pending in the high court that Cowasjee had filed, and Rahman represented him in each case. By his count, Cowasjee must have filed over a 100 cases in his lifetime. “Right up to the last week, I was fighting an amenity plot case – the Karachi Building Control Authority (KBCA) was trying to build their office building on a plot reserved for a park on University Road,” his lawyer said.

“He was passionate about what is right or wrong… about what Karachi should be like and what it was, and to fight for it.”

“There were three or four of us – Roland deSouza [from Shehri], Rafay Alam from Lahore… who were intimately involved in this, day in and day out. Working with him, you kind of absorbed some of that passion.”

According to Alam, who is also the vice-president for the Pakistan Environmental Law Association, “Ardeshir Cowasjee’s contribution to public-interest litigation can’t be understated. Even in Lahore, he led litigation against the conversion of Doongi Ground into a cinema. “

Cowasjee’s impact on public-interest litigation – which now forms the basis for key decisions – will continue to live on and Rahman will be fighting the pending cases in court. “Legally, they strike the name of the deceased but I am going to make sure they continue in his name,” he said.

This March, Shehri – Citizens for a Better Environment gave Cowasjee the Citizen Emeritus award, noting at the time that “although he has never been a formal member, he has been popularly and widely known as our ‘sarbarah’ (leader)” and wrote of his “inimitable ability to shame some into reversing wrongs.”

Cowasjee was not big on seminars but he did come to speak at a few ones Shehri organised, he added. He also gave financial support to the organisation. “There were times when members of Shehri were threatened physically and Cowasjee stepped in and complained to the right people in the government and exposed them,” deSouza recalled. “He always believed that bullies were always cowards and he stood up against chief ministers, governors – just about anyone.”

For deSouza, working with Cowasjee was a “grooming experience”. He recalled that some government officials were unable to talk to him or tackle him because he was so tough with them. There has not been a lot of activity in public-interest litigation in the past five or six years, particularly after the chief justice was deposed in 2007, deSouza admitted.

“As you develop a vaccine to the germ, the disease takes a new form. And since the bad guys are spending 24 hours a day figuring out to be bad – changing laws, etc – the good guys are doing this part-time.”

Sadly, there may not be many patrons of the city who are as devoted as Cowasjee. “He was a man of means and he wasn’t greedy. Most people don’t have the time for public interest – becoming richer than they already are.”

Some cases in the Supreme Court:

Cases in the Sindh High Court

1994 – Ardeshir Cowasjee & Others vs. Karachi Development Authority & Others Park on Plot # ST-2/8, Clifton

2002 – Ardeshir Cowasjee & Others vs. Province of Sindh & Others Sind Regulations & Control Ordinance No. VIII of 2002

Correction: This article was corrected to replace the word police with bullies, owing to a transcribing error.