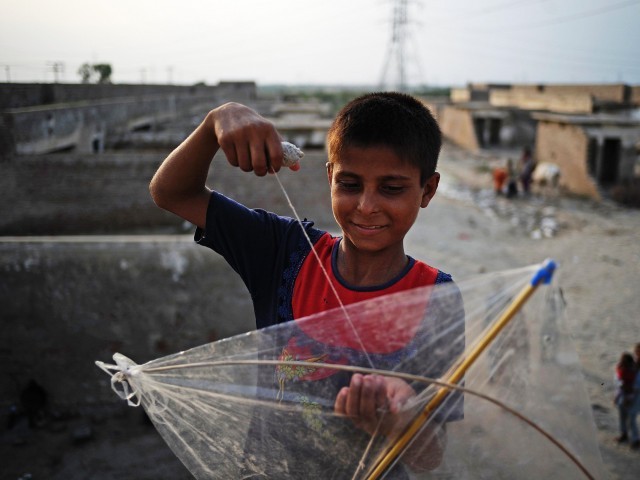 A displaced child keeps his spirits high by making a kite from rubbish on a building. PHOTO: AFP

ISLAMABAD: National Volunteer Movement (NVM) under the umbrella of Ministry of Youth Affairs has planned to distribute Eid gifts among the flood affected school-going children. Nazar Hussain Nazar, Director General NVM, said that the country was facing a depressing crisis and this gesture could bring a few smiles to needing faces.

NVM will be collecting toys, clothes, food, shoes, school bags and stationary items for distribution in the flood-hit areas. DG Nazar said, “We request students of all private schools to come forward and volunteer [for this drive].”

Relief camps will be established in different markets and sectors of Islamabad. Private school students will volunteer to collect donations at Super Market, Jinnah Super, and the main markets of F/10, G/10, G/11 and F/11.

The DG urged students to contribute whatever they could.

Nazar Hussain also said that NVM had successfully conducted training programmes for volunteers in Karachi and Sukkur that will benefit more than 10,000 people that had been displaced due to the recent devastating floods.

The training was imparted mostly to teachers working in government schools that had been converted into make-shift camps for internally displaced persons.

The teachers have been trained to manage the camps and impart these management techniques to other students and volunteers.

The training was conducted on August 26 in the Conference Hall of City District Nazim Office Karachi. “More than 100 volunteers attended the training sessions, out of these, a total of 95 volunteers (25 from Benazirabad, 24 from Karachi, 23 from Tando Allah Yar, 2 from Tando Muhamamd Khan and 21 from Thatha) were found fit for deployment at camps and other office jobs/IT works as per requirement of Provincial Disaster Management Authority Sindh,” he said.

The NVM is planning to train more volunteers in camp management around the flood-hit regions of the country.  Further such training is scheduled at Peshawar on September 2, Multan on September 4, Layyah on September 5 and Quetta on September 7.