Contra­ctors blow gaping hole in a wall under the histor­ic mosque’s dome.
By Our Correspondent
Published: November 25, 2012
Tweet Email 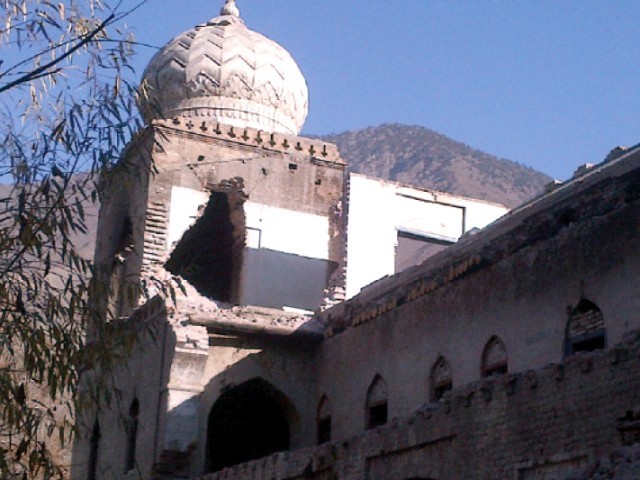 View of the defaced Shahi Masjid in Chitral. PHOTO: FILE

In an absurd attempt to renovate the historic Shahi Masjid in Chitral, contractors hired by the district administration have ended up defacing the historic building.

Shahzada Sirajul Mulk, a member of Chitrali royal family whose grandfather helped construct the mosque, has demanded of the Khyber-Pakhtunkhwa (K-P) government and the Peshawar High Court (PHC) to probe the “sordid episode” and bring those responsible to task.

Mulk told The Express Tribune on Saturday that the contractors of the Communication and Works (C&W) department have blown a gaping hole in one of the walls under the mosque’s dome. He said they wanted to bring down the wall so they filled explosive material into four two-and-half-inch deep holes they drilled into it and then denoted the explosives. When the blast failed to bring down the wall, they affixing a steel rope and used chain pulleys to pull it down, further defacing the structure.

Mulk said the Shahi Masjid is regarded as the finest piece of architecture in Chitral and K-P Chief Minister Ameer Haider Khan Hoti had recently provided Rs40 million for its restoration. He lambasted the contractors involved as well as the archaeologist, Yasmin Lari, who Mulk said was employed to “retain the originality of the structure”.

Mulk said all buildings across the province that are over 75 years old are protected under the K-P Antiquities Act and no restoration work can be carried out on them without clearance from the archaeology department. He said that a PC-1 has to be prepared followed by a work order to initiate the restoration work, however, these formalities were not carried out for Shahi Masjid.

A senior official of the C&W department denied any knowledge of the incident and claimed that the department has nothing to do with the renovations. However, District Coordination Officer (DCO) Chitral Rehmatullah Wazir refuted these claims and confirmed that it was the C&W department that was working on the project. Wazir said the contractor used explosives in a “misunderstanding” but assured that the police will register and an FIR against those responsible and take action against them.

“Even pick axes and shovels are avoided during conservation attempts, let alone explosives. This was madness,” said Naeem Safi, a conservationist. He said there are international and national conservation protocols which are followed in such efforts. “People [in Pakistan] must learn value life first, only then can they be sensitive about heritage,” he opined.

Lari, the archaeologist in question, has also tried to distance herself from the episode. In an email sent to conservation activists, of which a copy is available is with The Express Tribune, Lari noted that the Heritage Foundation and she were not formally engaged and she had agreed to provide her expert advise on a voluntary basis, “purely in order to save the historic structure”. She said it was “extremely unfortunate and highly contemptible to wilfully damage heritage structure” and agreed to initiate a probe by the government or the high court.

Work on three-story Shahi Masjid was launched in 1910 and the building was completed in 1922, when Shujaul Mulk ruled Chitral. Part of the building is stone masonry and the remaining burnt bricks masonry, laid in lime mortar.

Mulk said even the bricks used for in the structure were transported from India at a time when there were no proper roads to Chitral, while artisans were also brought from India.