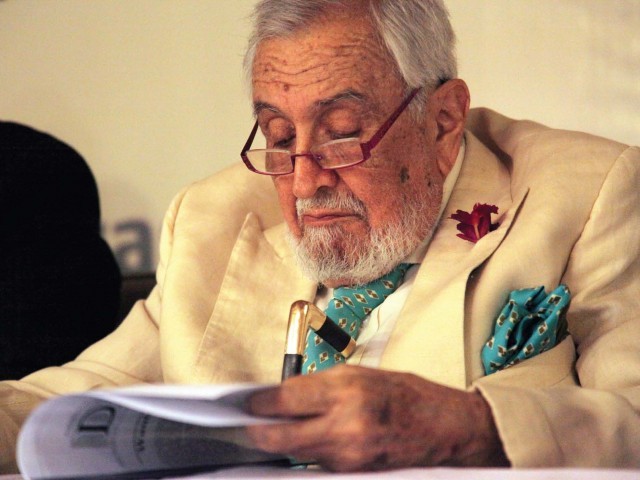 Cowasjee had documented the country's history for generations to come through his outspoken columns. PHOTO: NEFER SEHGAL/FILE

KARACHI: One of Karachi’s most prominent citizens, Ardeshir Cowasjee, passed away on Saturday.

He was born on April 13, 1926 in Dr Kanga’s Hospital in Saddar to Rustom Faqir Cowasjee and Mucca Rustomjee. His legacy is a fairly straightforward one. The scion of a wealthy Parsi family, he completed his schooling at Bai Virbaijee Soparivala (BVS) Parsi School and later pursued further education at DJ Science College.

After World War II he joined his family business – primarily merchant shipping, among other interests. In the later years of his life Cowasjee tried to keep it as lively as possible often seen cruising the streets of Karachi top down in his metallic powder blue convertible Mercedes.

Cowasjee had documented the country’s history for generations to come through his outspoken columns.

He is survived by two children, his son Rustom and daughter Ava.

Cowasjee was the eldest of three brothers. His younger brother RF Cowasjee passed away in 2011 and the youngest brother Cyrus R Cowasjee along with Ava, who replaced R F after his death, are trustees of the philanthropic Cowasjee Foundation. He also has a sister Zenia who lives in Canada.

Cowasjee the columnist, however, was a different man.

He spoke up and wrote against what he perceived to be wrong, in the country at large and on the developments in his beloved Karachi in specific.

Cowasjee voiced his blunt opinions over 30 years through his columns in daily Dawn.

Cowasjee was also a man of extreme likes and dislikes. He had a good friendship with Zulfikar Ali Bhutto (ZAB) but later on he developed differences with him.