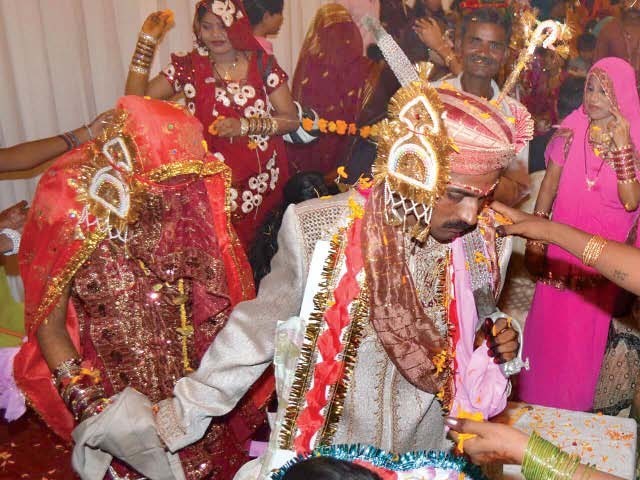 The Hindu Marriage Registration Bill has been pending in National Assembly since 2011. PHOTO: EXPRESS/FILE

KARACHI: Upset over the fact that Hindus are not allowed to register their marriages in courts, two minority MPAs moved the Hindu Marriages Registration Bill in the Sindh Assembly on Wednesday.

Pakistan Peoples Party MPA Pitanbar Sewani complained that unlike other religious minorities in the country, including Christians and Parsis, and to say nothing of the Muslim majority, a Hindu couple could not get their marriage registered in a court.

He added that this lack of documentation in turn creates problems for them when they apply for national identity cards and are asked by the National Database and Registration Authority (Nadra) to provide certificate of marital relations. In most cases, it boils down to whether the family has good relations with their community’s Maharaj, or chief, who would issue a certification document to the couple.

The Hindu Marriage Registration Bill has been pending with the National Assembly’s standing committee on law and justice since 2011. The delay was reportedly a result of a stalemate in the Hindu community failing to arrive at a consensus on various clauses ever since the bill was drafted in 2008, by the then minorities affairs minister Shahbaz Bhatti.

Sewani also alleged that Hindus also face a lot of hardship in getting other identification documents like passports and immigration and property-related statements. While citing the national census of 1998, Sewani and MPA Saleem Khursheed Khohar say that there are 4 million Hindus in Pakistan.