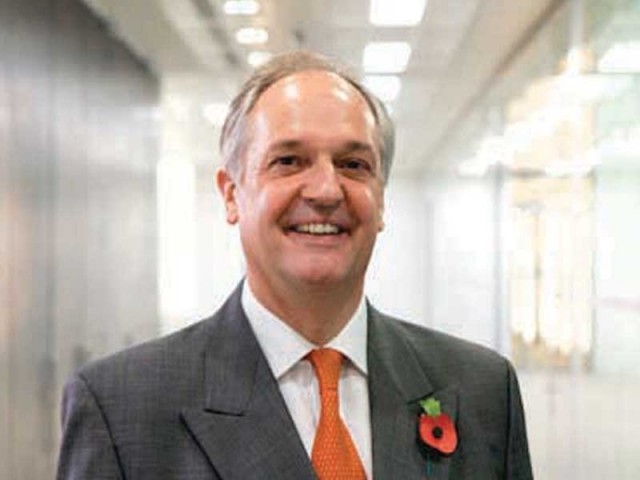 CEO of London-based giant visited the country as part of a global push to increase revenue from emerging markets.

It is a global food and consumer goods giant that serves over 2 billion consumers every day in more than 180 countries around the world, but Unilever’s global management team is convinced that the key to their future success lies in 16 emerging markets, of which Pakistan is one.

Paul Polman, the CEO of Unilever, and Harish Manwani, the chief operating officer, visited Pakistan on Tuesday in what appears to be part of their global push to gear the company’s growth strategy towards emerging markets. “We want to be in every market with more than 100 million consumers,” said Manwani. “And we want to be in every market where the purchasing power of the consumer is growing. Pakistan meets both of those criteria, the first one by quite a lot.”

About 56% of Unilever’s revenues come from emerging markets, a number that Manwani says could rise to as high as 75% over the next few years. In Pakistan, the company operates two subsidiaries, Unilever Pakistan and Unilever Pakistan Foods, both of which are publicly listed on the Karachi Stock Exchange. For the year 2011, the company’s Pakistani subsidiaries earned combined gross revenue of over Rs73 billion, or about 1.3% of the global total for Unilever.

Growth in Pakistan is significantly higher. While Unilever’s global revenues grew by around 5%, revenues in Pakistan grew by a much stronger 9.9%, even when taking into account the rupee’s depreciation against the euro, the company’s global reporting currency. In Pakistani rupees, gross revenues of both companies grew by nearly 17%.

But it is not just the current growth figures that appear to be attracting Unilever’s attention to Pakistan, but rather what is clearly a rapid expansion of the Pakistani middle class, which is causing purchasing power – and thus the propensity to buy branded products – to rise among a wide and diverse array of Pakistani consumers. Unilever is increasingly finding that it is selling its products to everyone from the bank CEO who works on Karachi’s II Chundrigar Road to the small shop owner in rural Sanghar to the grain merchant in a small town outside Sialkot.

Unilever Pakistan’s CEO Ehsan Malik, for instance, pointed out that while Unilever has market-leading brands in tea, he views the more than 50% of Pakistanis who still do not buy branded tea as his biggest opportunity, an attitude common across the packaged food and consumer goods sector in Pakistan.

Malik said that the company is actively trying to reach consumers in small towns and rural areas, well beyond the larger cities in the country. The company reaches 50,000 retailers in rural areas, said Malik, a number that keeps on expanding rapidly.

That focus on rural consumers appears to be part of the global strategy: Paul Polman said that Unilever’s connection to farmers and rural communities is part of its efforts to integrate its business strategy with social responsibility. “Over 40% of the world’s population is in agriculture. We want to integrate over 500,000 of them into our global supply chain. They tend to be more reliable suppliers and help us reduce our volatility. In turn, we provide them with a better livelihood,” said Polman.

Unilever’s global CEO was effusive in his praise of the team in Pakistan. “The water conservation techniques pioneered in Pakistan will now be replicated in Unilever factories around the world,” he said. “Pakistan has always provided us with talent, and is in fact exporting talent. Over 55 Pakistanis are now working in senior positions in Unilever all over the world.”

Malik embellished that point further: “About 18 months ago, we sent 10 Pakistani employees to South Africa to help set up their sales and distribution system, based on our model here.”

Having operated in Pakistan for nearly 64 years, Unilever appears keen to keep growing its relationship with the country. The visit of its global executives signals the importance of the country to Unilever’s growth strategy.