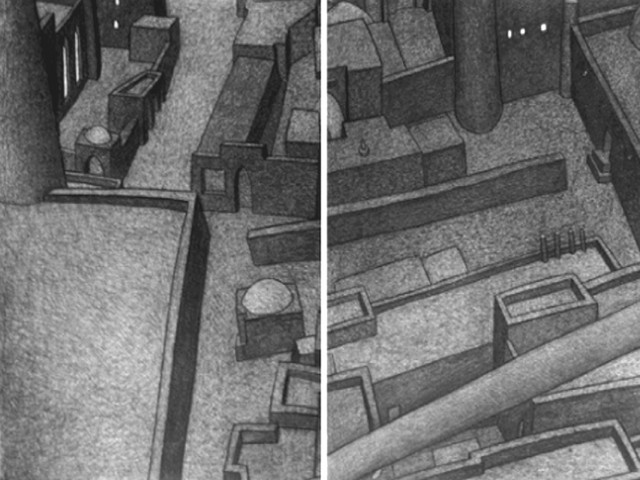 As many as 25 etchings and three drawings by Australian artist Damon Kowarsky went on display at the Lahore Art Council on November 19.

The pieces capture the urban and historical essence of the Walled City of Lahore, the Egyptian capital Cairo, Melbourne in Australia, the historic city of Khiva in Uzbekistan, the old city of Istanbul, New York City, and Meybod in Iran’s Yazd province.

Kowarsky, 40, says these are mostly old and unplanned cities. “The organic essence and the historical context make them visually very interesting,” he says.

Soft reds and murky greys and blues are a prominent feature of Kowarsky’s art. “Print-making has limited politics of colour. Muted colours also inspire an architectural style of drawing,” he says.

In ‘Pulaski Bridge’, the artist has drawn white pigeons against the skyline off the eponymous bridge connecting Queens and Brooklyn in New York City.

“These were stuffed birds displayed at the Metropolitan Museum of Art in New York. I sketched the birds as they looked very natural. Stuffed animals mostly appear artificial, but these birds seemed real,” he said. The flying birds give the image a feeling of hope, he said.

A series of drawings of Khiva have been sketched in shades of blue. “It’s a fascinating place where no cars are allowed.

It has many madrassas and mosques and old homes made into hotels.

The historical essence of the architecture has been retained. The government allows new structures only on traditional lines, while any dilapidated old structures are renovated according to the original building style,” he said.

The collection includes ink-printed drawings of Istanbul and Meybod. Also on display was a three-panel image of structures in Lahore’s Walled City, drawn from the rooftops of Shah Alam Bazaar and Masjid Wazir Khan.

A portrait, ‘Mustafa Badawi’, captures one of Kowarsky’s art students in Cairo, with architecture from the city in the backdrop.

Kowarsky is displaying work at the Lahore Art Council for the third time. In 2007, he taught drawing at Beaconhouse National University Lahore while learning miniature painting under Murad Mumtaz and Mahreen Zuberi. In 2010, he taught printmaking at the Indus Valley School of Art and Architecture in Karachi.