From pulp fiction to pulpy ‘soaps’

From pulp fiction to pulpy ‘soaps’

Most plays on TV centre around the positi­on that any woman not follow­ing a domest­ic role should be punish­ed, cautio­ned
By Tasneem Ahmar
Published: November 20, 2012
Tweet Email 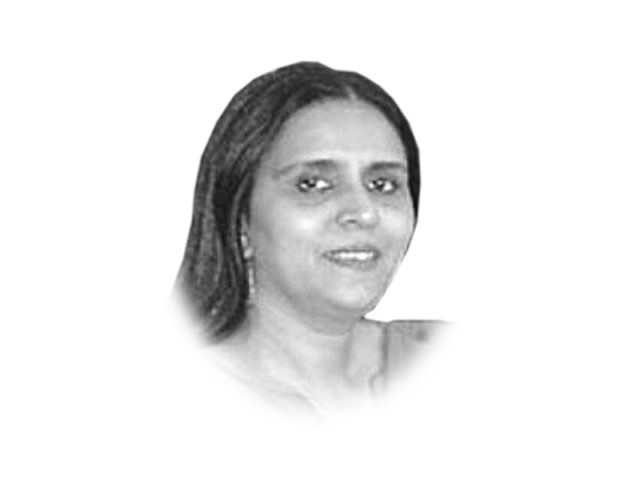 The writer is the director of the Uks Research Centre, a media advocacy and monitoring organisation based in Islamabad

A woman tells her husband who has just come back from work, “Please freshen up and I’ll get tea for you.” This apparently innocent remark is, in actual fact, a highly repressive, stereotypical phrase that limits the role of women to that of a mere subordinate. Unfortunately, it is heard repeatedly in today’s Pakistani television plays.

Most plays on the mini-screen centre around the position that any woman not following this domestic role, should either be punished, reprimanded or cautioned. If, heaven forbid, the woman/wife declines this role for any reason, the man/husband’s reaction is also stereotypically negative, depending in intensity on whether the woman is a homemaker — or ‘housewife’ to use the traditional term — or a working woman. The axe falls more forcefully if she is a working woman whose life does not centre around ‘serving’ her husband. And this is not the only stereotypical and repressive image depicting working women in recent TV serials/series/soaps telecast on a dozen or more entertainment channels. In “Durre Shewar”, a ‘hit’ serial that ended a few months ago, the protagonist is Haydar who is married to Shandana, a successful working woman. Haydar is portrayed as the typical macho male who revels in expressing his utter disgust and contempt for working women as, according to him, such women remain incapable of fulfilling their role as wives and mothers (and daughters-in-law) with the full commitment and dedication required.

In Pakistan especially, with most other avenues for entertainment/relaxation closed to the public, television is the focal point of almost every member of the family, at least in the evenings. Thus, television plays a major role in not simply disseminating information through news channels but in propagating social mores, healthy traditions and progressive ideals, etc. However, the manner in which women are generally portrayed in Pakistani TV plays clearly shows that there is no intellectual, even intelligent thinking whatsoever behind the scenes, on the part of writers, producers, directors, etc, on the societal repercussions that result from these negative, stereotypical depictions, including and especially gender inequality.

One does not wish to be overly critical of our TV plays. No doubt, the standard of production and acting has improved and great talent in acting and direction is clearly visible. However, this appears to be our only achievement in almost 50 years of television history.  In virtually all the plays, the storyline, the theme, the dialogue are retrogressive to the extent that one wonders where this mindset is coming from.

Almost all plays remain focused on depicting women as objects. From the content of the dialogue to the actions and reactions of the protagonists and supporting cast, all lead to a single conclusion: a woman is simply ‘a thing of beauty’, the sinf-e-nazuk, and that it is unacceptable for her to step out of the home (char dewari) to enter the employment sector or as entrepreneurs. For all single women, to fall in love, get married and remain confined to the home should be the ultimate goal in life.

One can only marvel at the writers of these regressive TV plays. Who are they? They certainly bring to mind the Urdu women’s digests that have remained popular over several decades. The cover invariably displays beautiful, coy women and the contents (printed on cheap quality paper, which is why they are known as ‘pulp’) are a barrage of romantic fiction centering on love and marriage. The stories in these digests not only pander to an unreal vision of the world and life, but portray the central role, that of ‘lovesick’ girls or women as being completely passive, with no mind of their own and totally dependent on the males of the family.

In an attempt to raise public awareness and break the negative stereotypes of women propagated through these digests, I felt compelled to write an article entitled “Pulp fiction” where I concluded: “Much of the material in these magazines is written in an intensely emotional idiom. The style may well appeal to readers thirsty for pulp entertainment but it also drives home a quintessentially conservative message. Whether deliberately or unintentionally, this literature strips women of their individual identity. They are shown to exist solely through their relationship with men, whether as wife, daughter, cook or mother … although writers do occasionally discuss topics such as domestic violence and sexual harassment, most paint pretty pictures of female fantasy.”

That was 1997. Today, in 2012, while we celebrate World Television Day, these writers of tawdry pulp fiction stories have since become some of the most sought after ‘writers’ in the country. Along with the negative stereotyping in most plays, if not all, is the increasing incidence of physical, emotional, mental and sexual abuse suffered by the women depicted in them. With the entire family, including husbands, fathers, brothers, sons, watching the plays together on a daily basis, it is the women of the household who must suffer as society reflects and replays the slaps, abuses, restrictions on mobility, movement, freedom of thought etc, endured by female characters in each story. To make matters worse, various so-called justifications for the abuse mouthed by some of the male characters in the play add insult to injury.

It is time that socially concerned citizens take cognisance of this dangerous precedence. Yes, dangerous, for it is harming the very heart of society and may well be one of the contributing causes towards the increasing levels of gender inequality, intolerance and injustice visible everywhere, whether in our homes or in public spaces.

More than a generational change