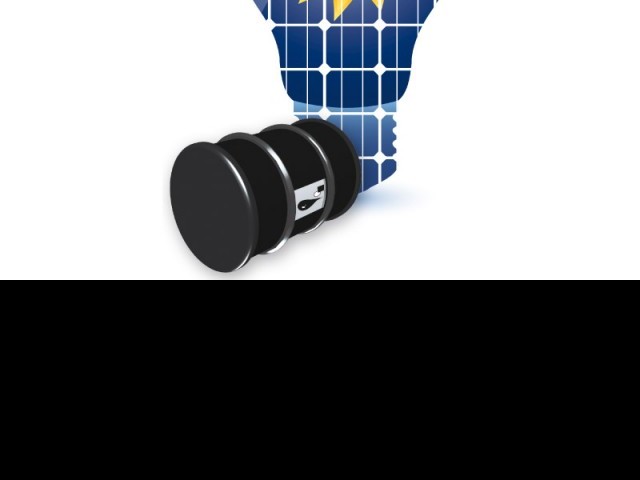 It was once thought to be one of the most expensive forms of electricity, but prices of photovoltaic cells have dropped so dramatically over the past two years that solar electricity is now cheaper than diesel-fired generator electricity and may soon compete even with the heavily subsidised cost of grid electricity in Pakistan.

In many parts of Pakistan, even off-grid solar power systems can produce electricity at approximately Rs14.40 per kilowatt-hour, or about $0.15 per kWh, according to Shaaf Mehboob, vice president of the Renewable and Alternative Energy Association of Pakistan (REAP), an industry group.

By contrast, grid electricity for most upper-middle class consumers in Pakistan currently costs in the range of Rs11 to Rs13 per kWh and diesel-fired generators can cost as much as Rs32 per kWh. While gas-fired generators can still produce cheaper electricity – owing to the highly subsidised domestic consumer gas prices in Pakistan – the natural gas shortage in the country has made the solution unviable.

That dramatic fall in the price of a unit of electricity is largely due to the sharp decline in the prices of photovoltaic cells, or solar panels. “The cost of importing one watt [of photovoltaic power generation capacity] is now just $1, compared to $2 just over a year ago, and down from $4 in 2008. That decline is quite noteworthy,” said Mehboob.

He said this on the sidelines of the inaugural session of a five-day training programme on photovoltaic systems organised with the help of Alternative Energy Development Board (AEDB) and a German technical training firm, GIZ.

Solar panels are now increasingly being recognised by many individual and even some industrial users in Pakistan as a cost-effective alternative to diesel generators and more reliable than gas-fired generators. Yet despite the economic logic, the rate of uptake appears to be low. REAP officials say that Pakistan imported just 15 megawatts of solar power production capacity in the first ten months of 2012.

The solar-power industry in Pakistan, however, is excited about its growth prospects. REAP started in 2010 and has already grown to over 270 member companies nationwide. Many importers have found particularly strong demand in parts of the country with unreliable grid electricity, such as the northern parts of Khyber-Pakhtunkhwa. Some companies, even large ones like Yunus Textile Mills, are considering installing solar panels as an alternative source of electricity to their back-up generators.

The sharp decline in photovoltaic cell prices is due to the dual effect of rising production in China and slowing demand in Europe, the main market for solar energy.

The irony of sun-starved Europe beating sunshine abundant Pakistan in solar energy adoption was emphasised by the German engineers who were present at the workshop. “The average solar radiation in Pakistan is significantly higher than Germany where solar panels do not produce energy in months like December and January when sunlight is usually low,” Raphael Lechner, one of the German trainers, told The Express Tribune. “Pakistan has a long way to go in the alternative energy sector, even when compared to its regional peers.”

Part of the reason for the lower uptake is the extraordinarily high subsidies on electricity given by the government to all consumers, regardless of ability to pay. In fiscal 2012, the government spent Rs500 billion subsidising electricity, more than half of the total budget deficit for the year. That subsidy artificially lowers the price of grid electricity in Pakistan to below average production costs, which renders otherwise workable alternatives like solar energy unviable.

Yet the solar energy industry is still optimistic, given the financially unsustainable nature of the government’s subsidy policy, which causes grid electricity to be highly unreliable in many parts of the country. In most of Punjab, summer power outages can last as long as 20 hours a day, a situation that is likely to fuel the demand for more reliable, even if slightly more expensive, solar electricity.