Thacke­ray died of cardio-respir­atory arrest at his home at the age of 86.
By Aditi Phadnis
Published: November 18, 2012
Tweet Email 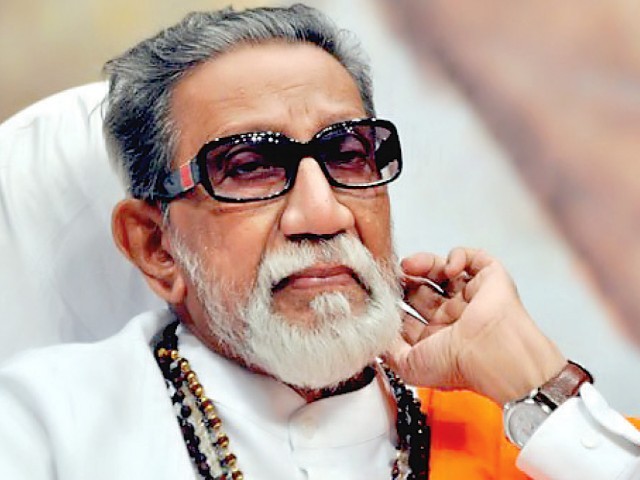 Notoriously known west of Wagah as the man behind the digging up of cricket pitches to stop the Pakistan team from playing in India, as well as threatening its artistes, Bal Thackarey passed away on Saturday aged 86.

One of India’s most polarising politicians and leader of an influential right-wing Hindu nationalist party, Thackeray died of cardio-respiratory arrest on Saturday at his home, one of his doctors, Jalil Parker, said.

A religious zealot whose grip over Mumbai often resembled that of a mob boss, Thackeray was president and founder of the hardline Shiv Sena (Shiva’s Army) party, built around his fiery rhetoric on religion, immigration and communalism.

His death leaves the western state of Maharashtra without one of its most controversial figures, who more than once expressed his admiration for Nazi dictator Adolf Hitler.

Born on January 23, 1926, “The Tiger” as he was known, began life as a political cartoonist but later became more involved in calling for greater rights for local Marathi-speaking people.

In the early 1950s, Maharashtra was the arena of contending identities. People from all over India came and settled there, attracted by Mumbai – the huge, thriving business centre of India, much like Karachi in Pakistan.

During this time, Thackeray, sensing a void, decided to launch a magazine dedicated to cartoons, called Marmik (apt comment), which mostly poked fun at Gujrati Seths, South Indian clerks, Udupi Hotel owners and Congress politicians among others – creating enduring stereotypes.  The magazine eventually also started to publish lists of new recruits in public sector undertakings to drive home how the “sons of the soil” were ignored.

Thus, was born the Shiv Sena – the first real movement dedicated to a Marathi identity.

The parameters of the Shiv Sena were well defined: Initially, it never grew beyond Mumbai and neighbouring areas, but Thackeray eventually expanded his arena, and Muslims became his targets.

He often referred to Indian Muslims as “anti-nationals” and was also fiercely critical of Pakistan, decrying efforts by New Delhi to reach out to it.

“Having peace talks with Pakistan, which is behind the blasts in India, is a farce,” Thackeray wrote in a newspaper in July, referring to bomb attacks in Mumbai in 2008. “Playing cricket with them is treason,” he added.

Most significantly, Thackeray stoked communal fires after Hindu militants destroyed the Babri Mosque in 1992 said to have been built on the site of a Hindu temple. As reprisal attacks spread throughout India, he called on Hindus to “teach (Muslims) a lesson”. A subsequent judicial inquiry later pointed the finger at Thackeray, accusing him of directly inciting anti-Muslim violence that left more than 1,000 people dead. However, Thackeray was never brought to book by the authorities.

Bal Thackeray was called the ‘remote control’: He gave a call; Shiv Sena cadres interpreted it and carried it out. The tentacles of the party spread far and wide in urban areas and a parallel ‘system,’ which was centralised, but still independent, took root.

Besides taking bold and aggressive positions on the ‘sons of soil’ issue, its brand of ‘Robin Hood’ style politics also helped Sena gain popularity among the masses.

The Bharatiya Janata Party saw the potential of this movement, and took charge. The BJP and Shiv Sena tweaked agendas and became an alliance, almost unbeatable in its electoral appeal.

In 1994, the Shiv Sena came to power in Maharashtra in a coalition with BJP. One of its first acts was to rename “Bombay” to “Mumbai” – in a move that was widely criticised at the time.

His death could spark a power struggle in the Shiv Sena, denting its support with its vote base in Maharashtra. Thackeray’s estranged nephew, Raj, broke away from the Shiv Sena in 2006 to form a rival party.

With the ‘remote control’ no more, a major breach in the politics of Maharashtra is likely to occur.