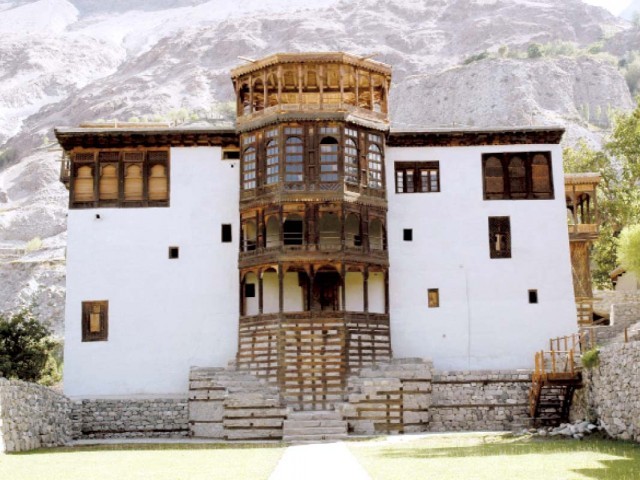 View of the Khaplu Palace and Residence, located to the north of Khaplu Town, about 400 kilometres from Gilgit. PHOTO: FILE

The restoration of a 19th century palace in Gilgit-Baltistan (G-B)’s Khaplu valley has won a non-governmental organisation (NGO) an international tourism award.

Renovation of the Khaplu Palace and Residence was “highly commended” under the “best in poverty reduction” category of The Virgin Holidays Responsible Tourism Awards 2012 announced recently at this year’s World Travel Market.

“This was the only project from Pakistan that won an award and this is certainly good news for us,” said Col (Retd) Salman Beg, the chief executive officer of Aga Khan Cultural Service Pakistan (AKCSP) — the NGO that restored the historic building. “The awards rested on a simple principle: that all types of tourism, from niche to mainstream, can and should be organised in a way that preserves, respects and benefits the local people,” he added.

Built in the 1840s, the palace and residence of the then raja of Khaplu was on the verge of a collapse when the NGO began its restoration in 2001. “It was in a real bad shape when we started the renovations,” Beg said of the palace located to the north of Khaplu Town, about 400 kilometres from Gilgit.

After five years of work, the palace was opened to tourists in July 2011 as a heritage hotel managed by the Tourism Promotion Services. The hotel offers 21 rooms, of which six are in the palace itself.

According to the management, over 70 per cent of income generated from the hotel is spent locally, allowing for Khaplu Palace to be an anchor-point for development. The management said it employed individuals from 400 local households of Khaplu in the renovation of the palace and continue to employ individuals from 35 households.

Beg praised the Royal Norwegian Embassy Islamabad for the success of the project, saying the project would not have been completed without their “generous support”.

The Responsible Tourism Awards have attracted over 10,000 nominations from members of the public, leading to 201 unique organisations awarded from 51 countries around the world.