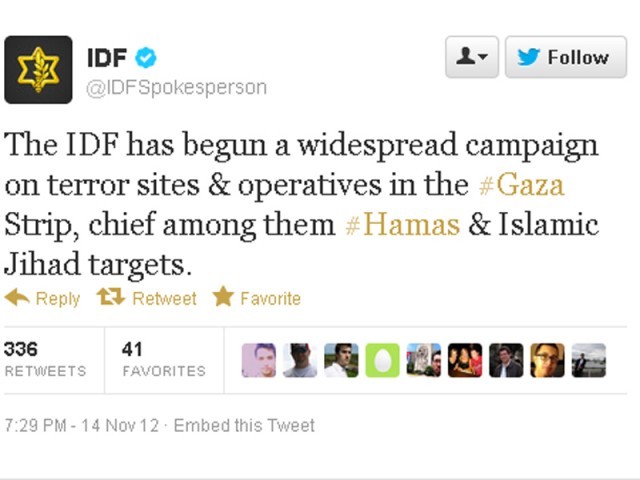 As Israel launched a series of air strikes into the heart of the Gaza strip, taking out targets, it managed to break new technological ground.

However, it is not the “Iron Dome” missile shield, to which many, including the Israeli Prime Minister Benjamin Netanyahu have pointed out for its efficacy in shooting down rockets fired at Israeli settlements.

In a first, a military conflict was officially announced via the microblogging social media network Twitter, instead of in a prepared press statement read out before mass media outlets like television or radio, like US President Barack Obama announced the operation that killed Osama bin Laden.

The Israeli Defence Forces official Twitter account, @idfspokesperson (a verified account) tweeted at around 9.30am (US Eastern time) that they had embarked on Operation Pillar of Defense:

“The IDF has begun a widespread campaign on terror sites & operatives in the #Gaza Strip, chief among them #Hamas and Islamic Jihad targets.”

“All options are on the table. If necessary, the IDF is ready to initiate a ground operation in Gaza.”

The IDF revealed the objectives of their campaign in a tweet:

“There are 2 main goals of this IDF operation: to protect Israeli civilians and to cripple the terrorist infrastructure in the #GazaStrip.”

The IDF has since continued to use their Twitter account as their primary mouthpiece on the Gaza conflict providing routine updates about the attacks. They account even posted a link leading to a video of their attack on Hamas commander Ahmed Al-Jabri.