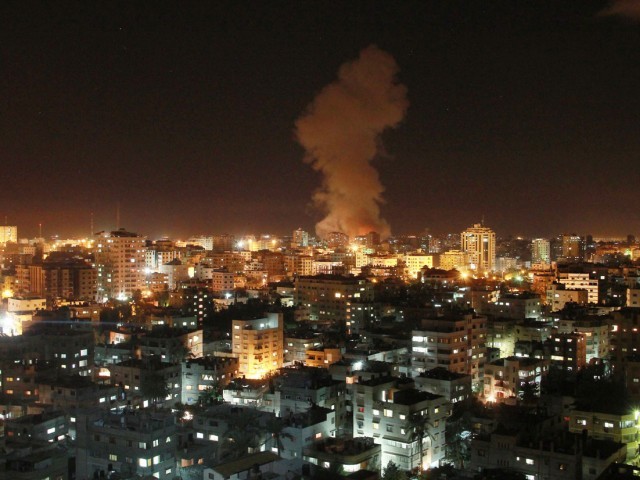 Israel kicked off its campaign to send a “clear message” to Hamas by killing their commander in an airstrike on Wednesday afternoon. Prime Minister Benjamin Netanyahu, in an ominous press conference warned that the scope of its continuing bombing raids could be widened.

Israel sent a “clear message” to Hamas through the killing of its top military commander and is ready to widen its operation in Gaza if necessary, Prime Minister Benjamin Netanyahu warned on Wednesday.

“Today we sent a clear message to Hamas and other terrorist organisations, and if it becomes necessary we are prepared to expand the operation,” he said in a televised address.

Speaking several hours after a major wave of air strikes pounded militant targets in the Gaza Strip, killing top Hamas commander Ahmed Al-Jaabari and eight other Palestinians, Netanyahu vowed Israel would not tolerate any further rocket fire on its territory.

“Hamas and the terror organisations have chosen to escalate their attacks on the citizens of Israel in recent days. We will not tolerate a situation in which Israeli citizens are threatened by rocket fire,” he said after consultations with his security cabinet.

Defence Minister Ehud Barak said the strike was only the beginning of an operation whose goals were to strengthen Israel’s deterrence, damage militant groups’ rocket-firing capabilities and stamp out attacks on southern Israel.

“Israel doesn’t want a war but the Hamas provocation of recent weeks, with recurring, frequent rounds of mortar and rockets fired at southern Israel, an explosive tunnel that was activated … and anti-tank fire at a jeep in Israel, forced us to act sharply and decisively,” Barak said.

He was referring to a series of attacks by Gaza militants.

“We are at the beginning, not end of this action,” he said, stressing the need to be “on high alert in Israel and West Bank.”

“It won’t be a quick fix.. but we’ll reach the goals we set for this operation.”