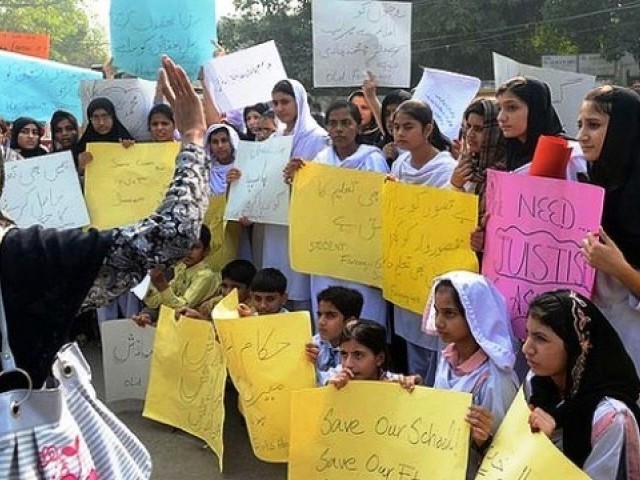 Students of Farooqi Girls' High School wave placards as they stage a protest in Lahore on November 3, 2012, demanding the re-opening of their school. PHOTO: AFP

LAHORE: A headteacher caught in a blasphemy row over a piece of homework allegedly containing derogatory references to the Prophet Mohammed (pbuh) was Wednesday released on bail, his lawyer said.

A lower court had early this month refused bail and remanded Farooqi in custody for 14 days on charges of blasphemy despite arguments he had no direct part in the case.

A teacher, Arfa Iftikhar, was forced into hiding after a furious mob stormed the school in the eastern city of Lahore over a piece of homework she set. Police are still searching for her.

The school management had subsequently published front page adverts in two leading newspapers after the incident to deny any knowledge of the alleged insults, saying Iftikhar distributed the work just 10 minutes before the school closed for the Eidul Azha holiday.

Activists say Pakistan’s harsh blasphemy laws are often abused to settle personal scores, and Ashraf said the possibility of a conspiracy against the school, one of the most successful in Lahore, could not be ruled out.