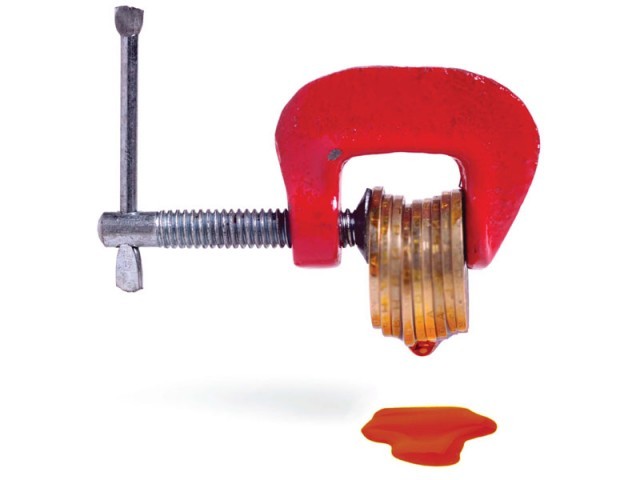 Say the govt has failed to protect them; their colleagues, however, have refused to relent to growing pressure. DESIGN: CREATIVE COMMON

Accepting the parallel existence of extortionists (bhatta mafia) as protectors alongside the law enforcement agencies in Karachi, some traders in the city have decided to pay extortion money to them for protection and security in their respective areas, representatives of trade groups said on Tuesday.

“This step shows that traders think extortionists are more powerful than the government,” All Karachi Tajir Ittehad chief cAtiq Mir said. “The action of some traders proves that they have formally accepted the state within a state in Karachi.”

Mir added: “This is the height of helplessness of traders. They have been crying [about extortionists] for over two years but nobody is listening to them.”

Representatives of different trade bodies said that traders and small businesses were dismayed at the government’s inaction and they have no confidence in the government to provide security.

Mir revealed that some traders met him on Tuesday and informed him that from now on they would regularly pay extortion money ranging from Rs500 to Rs1,000 per shop and gain immunity for themselves. According to him, traders no longer feel that the police and Rangers can protect them. And they had little choice than to reconcile with the idea of extortion.

Some traders are from the old city area – the volatile southern most area of city and some other areas that are situated in the city centre, Mir claimed.

Other traders will not bow down

However, subsequent to this development, other trader groups called their meetings on Tuesday and decided not to pay extortion to the mafia.

“We have decided not to pay a single penny to any group because by doing this we will accept their upper hand in this situation,” Chairman Old City Traders Alliance, Jameel Paracha said. “If we pay them Rs1,000 per shop today, tomorrow they will demand Rs5,000, then who will pay them?” he asked.

Paracha mentioned that around 20 days ago, leading businessmen met Sindh Governor Dr Ishratul Ebad Khan and threatened to give a strike call if their grievances were not addressed. But, unfortunately, the government’s action was still limited to words only and there was no security plan on the ground in the most affected areas of the city.

Paracha said that there were over 200 markets in the old city area and the government had recently provided only five policemen to each market, which he said was not enough and the situation would continue to remain unsafe.

This is why traders and businessmen are demanding the government to use the army to deal with the extortionists groups active in Karachi, Paracha concluded.