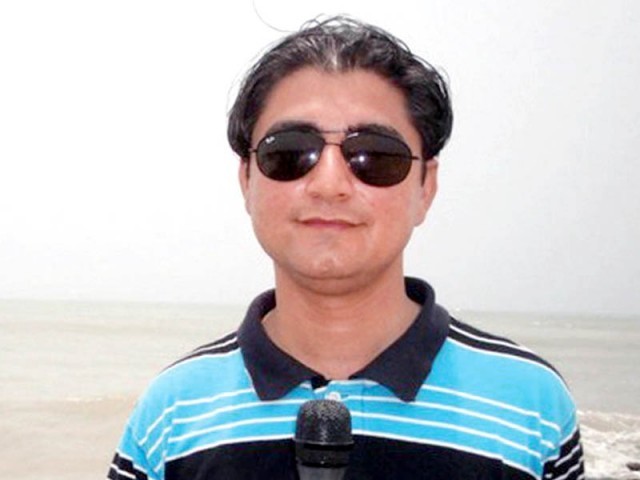 Babar’s murder case has been delayed due to security concerns for witnesses and targeted killings of those who come close to testify against the suspects.

KARACHI: The last eyewitness of Geo Television reporter Wali Babar’s assassination, Haider Ali, who was shot dead on Sunday, was to testify in the trial court today.

The first witness to take the fall was Rajab Bengali who came forth as an eyewitness within days after the journalist was murdered. Bengali was shot dead on January 29, 2011. A few days later, on January 31, 2011, police constable Asif Rafiq, who had noted down the registration plate number of the car used in the attack and informed the authorities, was gunned down.

The third eyewitness, head constable Arshad Kundi, who helped the investigators trace the location of the suspects’ car in Mobina Town was murdered on March 20, 2011. Apart from the eyewitnesses, one brother and a cousin of the case investigator, inspector Shafiq Tanoli, have also been shot dead.

Of the 23 witnesses listed in the case, only seven have deposed so far and due to security concerns, the trial is now being held inside the Karachi Central Prison by the Anti-Terrorism Court III. The last hearing was held on November 7.

Ali’s murder takes place even after the Sindh High Court ordered that the government provide security to the witnesses and lawyers involved in the case. The trial court was also directed to wrap up the case within 45 days on October 19.

The ATC III prosecutor, Abdul Maroof, described Ali as the only remaining eyewitness in the case, who had also identified the suspects allegedly involved in the journalist’s murder before a judicial magistrate. Haider Ali was supposed to be underground. “This is how strong their [criminals] network is. They located him and killed him just two days before he was supposed to appear in the court,” Maroof told The Express Tribune. “It is negligence on part of police for not protecting him.”

The prosecutor brushed aside unconfirmed reports suggesting Ali was a police informer.

According to Section 21 of the Anti-Terrorism Act, 1997, the court may order protection of people involved in proceedings and not disclose their identities. It also states that during any inquiry, investigation or court proceedings, adequate protection shall be provided to a witness identifying any accused.

President Asif Ali Zardari has recently asked for a witness protection law to be introduced as Pakistan has no witness protection programme, which causes witnesses in many high-profile cases to either retract their testimonies or refuse to identify suspects.

The murder of another key witness in Wali Babar’s case would have a negative impact on other witnesses in terrorism cases, Maroof speculated. “It will discourage people [from coming forward], who are already reluctant to be witnesses,” he said.

Other witnesses are Wali Babar’s brother – who is also the complainant and has testified already – and government witnesses. The court also has a confessional statement from one of the alleged perpetrators.

The suspects – Mohammad Shahrukh alias Mani, Faisal alias Nafsiyati, Mohammad Shakeel, Naveed Shah alias Polka and Syed Mohammad Ali Rizvi – have all been charged with murder on common intent and under Section 7 of the Anti-Terrorism Act. A prime suspect, Liaquat alias Tension, was killed in an alleged encounter with Darakshan police in March. Five other men – Kamran alias Zeeshan, Junaid, Saeed, Liaquat and Faisal – have been declared fugitives. The Liaquatabad supermarket police had registered the murder case of Wali Khan Babar, who was shot dead on January 13, 2011.

With additional input from Faraz Khan