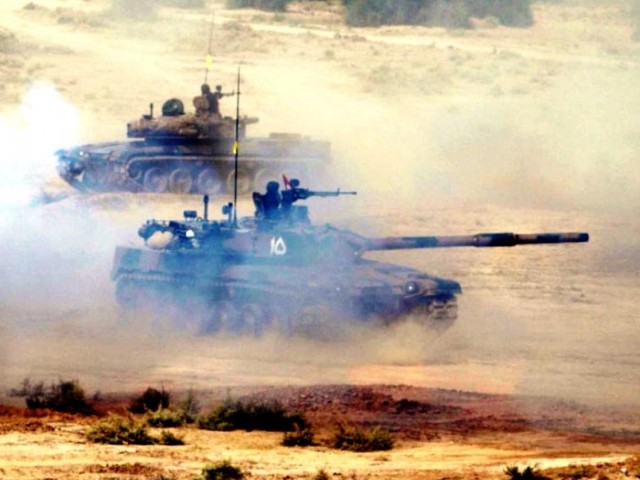 It is equipped with a 125mm gun and can fire sophisticated ammunition, missiles while stationary or moving. PHOTO: ONLINE / FILE

Pakistan is aiming to find international buyers for its prized Al-Khalid tank, after reaching an understanding with co-producer China to market the product together, a top military official said on Sunday.

“We are not in the business of selling t-shirts,” Khan said during the closing ceremony of the exhibition, as newsmen pushed him to justify claims about the event being a success. “It takes months and years of negotiations to seal the agreements. This MoU will help us a lot.”

“We have also received orders for our unmanned aerial vehicle (UAV), commonly known as a drone, which is used for intelligence gathering by police and military in different parts of the world,” he added.

The Al-Khalid tank was developed in the 1990s. It is equipped with a 125mm gun and has the capability to fire sophisticated ammunition including missiles in both stationary and moving conditions.

For years, Pakistan has been trying in vain to sell the product, while China is also marketing a variant of Al-Khalid. Joint marketing with China opens up potential markets that would otherwise have been difficult for Islamabad to penetrate into, officials said.  Under the deal, profit from the sale will be mutually shared.

Major General Khan said selling heavy equipment like tanks and aircraft is not easy as political considerations need to be taken into account. “At times even if a country wants to buy something, the deal breaks off because of some political angle.”

Foreign delegates who visited the exhibition will come back with requests to test the military gear and equipment in coming months, he said. “But I can assure you there has been a lot of interest in what we make.”

However, Khan said it was impossible to state in numbers the size of deals made during the exhibition.

Military officials involved in international defence trade say Pakistan is continuously being sidelined because of its geopolitical situation.

(WITH ADDITIONAL INPUT FROM FARHAN ZAHEER)