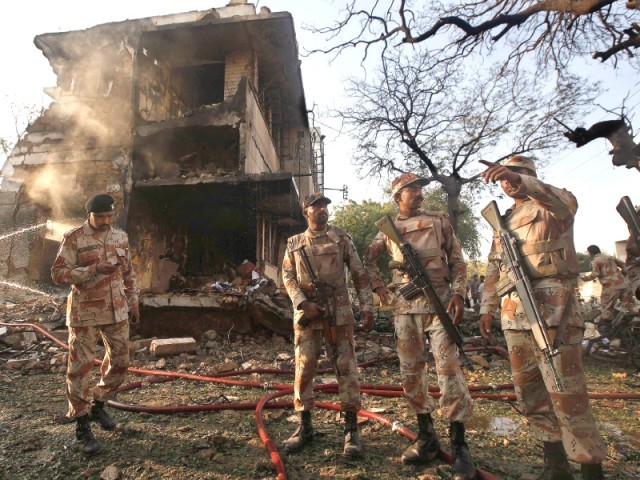 Paramilitary soldiers at the site of the blast. PHOTO: REUTERS

A massive suicide blast rocked a Pakistan Rangers’ complex in Karachi early morning on Thursday, killing at least three Rangers personnel. Twenty-three others were wounded when a suicide bomber rammed an explosives-laden truck into the entrance of the complex, situated in the city’s North Nazimabad locality.

“Three of our soldiers have been martyred and 18 others wounded in the attack this morning,” Rangers spokesman Major Sibtain told AFP. According to senior police official Khurram Waris, four civilians and a police officer were among the wounded as well.

The blast, which occurred around 7am and was heard miles away, was strong enough to level a portion of the complex and damage several nearby houses, factories and buildings, including the offices of the Karachi Electric Supply Company (KESC). A fire also erupted at the Rangers complex and took three fire tenders to extinguish.

Nearby schools were also closed as panic spread among residents. The KESC administration immediately suspended electricity supply to avoid any untoward incident during rescue work. The entire locality was cordoned off soon and no one from the media was allowed to go inside. Additional security contingents and intelligence officials were deployed at the site.

“The suicide bomber used a vegetable laden truck to attack the Rangers complex… Around 100kg of explosives were used in the assault,” he said.

“The vehicle exploded before the gate of Rangers’ complex because it could not enter inside,” he maintained.

Both Maulana Fazlullah’s Taliban faction and Tehreek-e-Taliban Pakistan (TTP) have claimed responsibility for the attack. Fazlullah’s spokesman Sirajuddin Ahmad claimed the attack was “revenge for the arrest, torture and killing of our people” by security forces in the region. Other reports cited TTP spokesman Ehsanullah Ehsan claiming responsibility for the assault and promising more such strikes in the future.

“We had information that some big attack was planned in the city, but had no information regarding possible targets,” District West DIG Javed Odho told The Express Tribune. He said parts of the bomber’s remains had been sent to the laboratory to determine his identity. He further informed that the vehicle’s chassis and registration number had been obtained but were found to be fake.

The victims were moved to Abbasi Shaheed Hospital where doctors pronounced two Rangers personnel, identified as Lance Naik Khalid Mehmood and sepoy Abdul Razzak, dead on arrival. The third Rangers sepoy, identified as Imran Wali, died during treatment. The deceased had been on guard duty at the complex’s entrance. The remaining injured Rangers personnel were later moved to PNS Shifa Hospital.

Speaking to The Express Tribune from his hospital bed, injured Rangers official Farooq said he fell unconscious immediately after the blast. “I was preparing for duty when I saw the truck approaching the entrance from a window… It was a very powerful blast… the entire building shook and I was knocked unconscious,” he recalled.

While collecting evidence from the site, bomb disposal squad (BDS) officials discovered that no ball bearings or other shrapnel were used in the explosive device. “In addition to 150kg of high explosive (HE) material, TNT was used in the blast, which helped start the blaze following the blast,” a BDS official told The Express Tribune.

Meanwhile, security agencies allegedly took two suspects, accused of filming injured Rangers personnel, into custody from the hospital. They, however, neither confirmed nor denied whether the two had been detained. No case against them has been registered either.