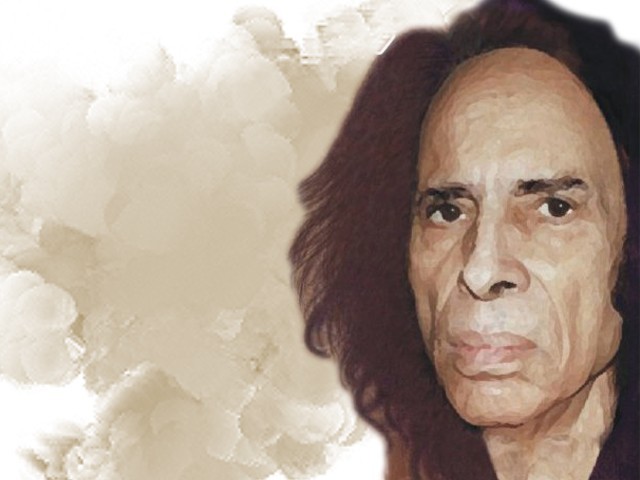 Jaun Elia was born on December 14, 1931 in Amroha, Uttar Pradesh. He was the youngest of his siblings.

His father, Shafiq Hasan Elia, was involved in art and literature and was also an astrologer and a poet.

This literary environment moulded him along the same lines, and he wrote his first Urdu couplet when he was just eight years old.

He was fluent in Arabic, English, Persian, Sanskrit and Hebrew.

During his youth, Pakistan gained independence as a Muslim state.

Elia migrated to Pakistan in 1957, and made Karachi his home. His poetry won him both acclaim and approbation in the local literary circle.

His first poetry collection Shayad was published in 1991, when he was 60. His preface in this collection provided deep insights into his works and the culture within which he was expressing his ideas.

The preface can also be considered as a fine example of modern Urdu prose.

The second collection of his poetry Ya’ani was published posthumously in 2003.

Later his companion, Khalid Ansari, compiled and published his three consecutive collections, Gumaan in 2004, Lekin in 2006 and Goya in 2008.

The poet briefly worked as an editor with Ismaili Tariqah and Religious Education Board in Karachi, Sindh, Pakistan.

His translation of various Mautazalite treatises, a book on 12th century Fatimid revolutionary Hassan Bin Sabbah, and also various texts about the Ismaili sect in Islam are a major contribution to the Urdu language and literature.

Elia’s prose and other translation of major Ismaili philosophical works can be found at Ismaili Tariqah Board libraries in Karachi.

His synthesis of this knowledge into his poetry differentiates him from his modern contemporaries.

He died after a protracted illness on 8 November 2002 in Karachi.