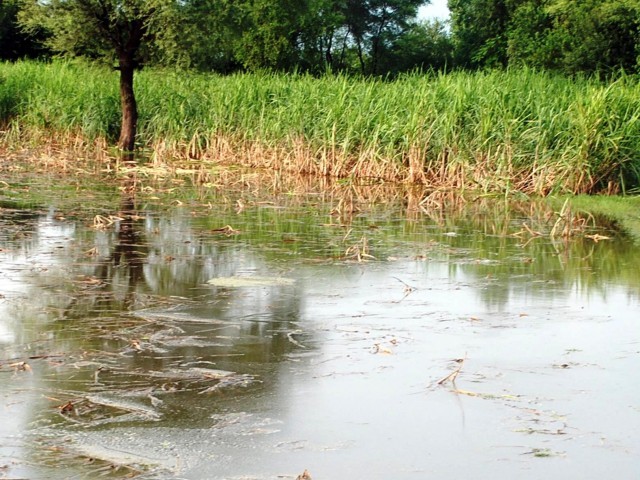 The floods have destroyed much agriculture and farmland. PHOTO: ISRRARUL HAQ/EXPRESS

SWAT: Matta tehsil, one of the major fruit producing areas of Pakistan, where 70 per cent of alpine fruits are also grown, is famous for its orchards of high quality apples, peaches , apricot, plum and persimmon and where agriculture and fruit orchards are the main sources of income for the locals.

The fruit is largely exported to foreign markets but unfortunately this year, the matured fruit orchards remained untouched, rotting away due to the collapsed infrastructure caused by the recent flood in the valley.

The destruction affected both, the orchard owners as well as fruit dealers, while experts estimated losses in billions. Ihsanullah Khan a landlord who has apple and peach orchards in Matta told The Express Tribune, “I have the best orchards of peaches and apples which earned me millions every year but over the last two years the orchards were badly affected by militancy and now because of the flood the matured apples and peaches have been damaged.”

“What will I do with the fruit here? I’ll just give it to the locals for free. It not only caused a loss to me but also to the district economy,” he added.

The loss has affected not only orchard owners but locals in general, rendering thousands of workers jobless. Mohammad Yaqoob, a labourer in the local orchards said while pointing to an apple orchard, “This orchard has been a major source of livelihood for my family. I along with my two sons, who are 16 and 14, worked here during the season to earn our bread. But this year the flood has snatched our food from us.”

“We can’t even get to Mingora, the main economic hub of the district to work there and earn, because the flood washed away the bridges as well,” he said.

Diyar Khan, a local fruit dealer told The Express Tribune, “These days, we usually send hundreds of trucks loaded with fruits to the markets throughout the country but because there’s no bridge, you can see no truck going.” He said the loss caused to the district fruit based economy was in billions. “These orchards provided employment to 70 per cent of the locals, and now they are all unemployed,” he added.

“Many fruit dealers who had already invested huge amounts in these apple and peach orchards are now crying over their losses, it affected some psychologically because they had invested so much in to it, losing it all within seconds,” he said referring to the unfortunate fruit dealers.

He said that in order to save the remaining orchards and to protect fruit dealers from going completely bankrupt, the government must build temporary bridges across the Swat River so the remaining stock could be transported.

According to Provincial Minister Mian Iftikhar Hussain, the loss of fruits amounted to Rs396 million as fruit orchards on 13,202 acres of land were destroyed.