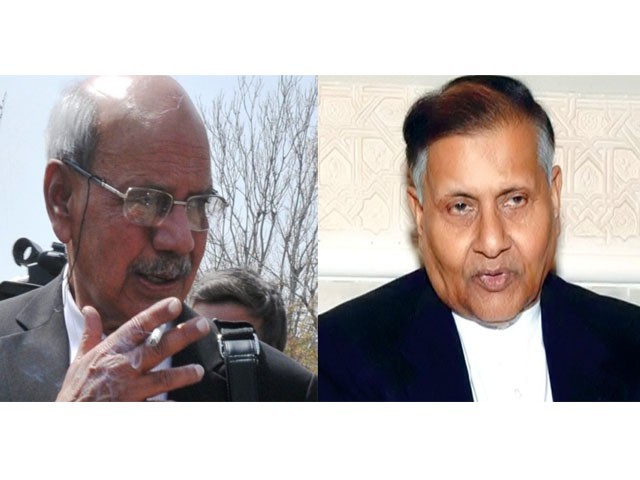 Both the generals have expressed their dissatisfaction over the verdict and are looking forward to presenting their side of the case when it finally comes to a trial court. PHOTO: FILE

Will the PPP government prosecute former army chief General Mirza Aslam Beg (retd) and former DG-ISI Asad Durrani in the aftermath of the Supreme Court verdict, wherein they were found guilty in the long-standing Asghar Khan petition after 16 years?

The Supreme Court, in its short order, has ruled that the late Ghulam Ishaq Khan, who was the then-president of Pakistan along with Beg and Durrani, acted in violation of the Constitution by facilitating the success of a group of politicians and political parties, etc, against rival candidates in the general election of 1990, for which they secured funds from Younis Habib.

Both the generals have expressed their dissatisfaction over the verdict and are looking forward to presenting their side of the case when it finally comes to a trial court. The point that will come up for discussion and will exercise many minds is the compulsion of  ‘obeying orders’ even when their legality is even vaguely in violation of the law.

The supremacy of the army in Pakistan is still tacitly accepted and no government can survive for long unless it aligns itself with its thinking and accepts its ‘national strategy’. The past also tells us that the Constitution favoured the ‘troika system’ that rigged the 1990 election with bribery. The president was the supreme commander armed with Article 58(2)(b) that could cashier the elected parliament. The judiciary invariably sided with the ‘troika’ and legitimised those actions which are now being challenged by the Supreme Court.

The present PPP government, though surviving in a deceptive, new ambience of military non-interference and judicial autonomy, is hardly better placed to investigate the generals. The political opposition still wants it out by fair method or foul and the judiciary is snapping at its heels while the military can barely tolerate it after the Memogate case.

The supremacy of the military in Pakistan has its origin in Pakistan’s nationalism and it is going to be difficult for the government to try the generals under Article 6 for treason and may ask the army to prosecute them under its law, not least influenced by a recent example of its refusal to expose a number of its corrupt retired officers to the law of the land.

Shuja Nawaz, in his authoritative history of the army, Crossed Swords: Pakistan its Army and Wars within (2008) explains why it may be difficult to prosecute the generals. “The Pakistan Army, a well-organised entity, has tried to fit into an underdeveloped political system. While responding to the unequal challenge of next-door India, it has ended up appropriating for itself the bulk of the state’s resources. Furthermore, its acts of trespassing and usurpation have sapped its professional function.”

Long years of military rule has shaped the national mind, already inclined towards jihad. The Pakistani mind is a militarised mind. Our children imbibe militarism from textbooks. If in the past, India was the enemy we had to defeat, today, it is a combination of foes with India, the US and Israel rolled into one. We need a strong and paramount army now more than ever before. The effect is total ignorance of economy-based governance, a blind carnal attraction to nuclear weapons which a civilian prime minister tested in 1998, after which there was no domestic or foreign investment in Pakistan.

Judicial immaculacy does not fit into the new paradigm of a weak state that has lost its writ in most of its territory, which cannot successfully prosecute and punish the terrorists it catches and lets its citizens survive by paying ransom to kidnappers and bank robbers whose ideology is deemed superior to the ideology of Pakistan by a vast madrassa network patiently waiting for a ‘revolution’. Alive to the cue, the politicians, too, predict a ‘revolution’ as Lal Masjid in Islamabad gets ready to build a bigger stronghold in the heart of the capital for the Taliban as the next rulers of Pakistan.