"Probab­ly this is the last reshuf­fle," the prime minist­er said at the presid­ential palace in New Delhi.
By AFP
Published: October 28, 2012
Tweet Email 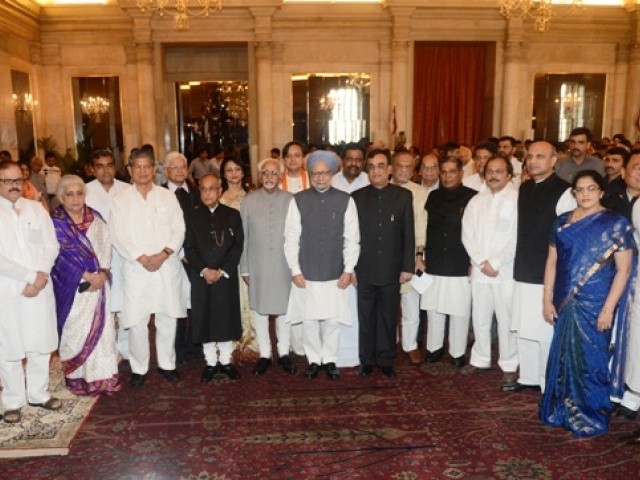 NEW DELHI: Indian Premier Manmohan Singh brought seven new faces into his cabinet Sunday in the biggest reshuffle since his re-election as he tried to revive his party’s flagging fortunes before polls due in 2014.

Singh named Salman Khurshid, 59, as a replacement for the 80-year-old foreign minister SM Krishna as he attempted to dispel the image of a struggling government, which recently lost its majority.

However there was no place at the cabinet table for Rahul Gandhi, the 42-year-old scion of the Gandhi-Nehru political dynasty, who once again turned down an offer to enter government.

Speaking to reporters after a swearing-in ceremony for the new ministers, Singh said he expected his new team to remain in office until the next elections.

“Probably this is the last reshuffle,” the prime minister said at the presidential palace in New Delhi. “I don’t see early elections. Elections will be held in due course.”

The other newcomers include Rahman Khan who was named as minority affairs minister, Ajay Maken who becomes housing minister and Dinsha Patel who is now mines minister.

They will be joined by Pallam Raju, who was promoted to human resources development minister. Harish Rawat was placed in charge of water resources and Chandresh Kumari was appointed culture minister.

The government has been mired in scandal in recent months, most notably by revelations surrounding the tender process for state-owned coal mines.

Economic growth, which had been touching double figures at the beginning of Singh’s second term, has now slowed down to around five percent.

Trinamool’s pullout in protest at a series of economic reforms means the government is now a minority administration. It is no immediate danger of falling as it has secured the support of another regional party which is outside cabinet.

India’s two largest opposition parties scoffed at the shakeup, dubbing it a futile exercise by a scandal-tainted government.

“It is a vain exercise by the government to refurbish its image in the face of the corruption charges it is facing,” Rajiv Pratap Rudi, spokesman of the main opposition Bharatiya Janata Party, told AFP.

Communists, who have dubbed the recent rush of reforms by the government as “anti-people”, also mocked the long-awaited revamp.

“The policies of the government will be the same they have been pursuing,” Prakash Karat, general secretary of the Communist Party of India-Marxist, told AFP.

Analysts too doubted that Sunday’s overhaul would do much for Congress’s fortunes when the country votes in an election scheduled for the spring of 2014.

“The cabinet reshuffle is a wake-up call which has come too late, just as the big-ticket reforms have come too late,” said Ajay Saha, a political scientist at Delhi University.

Khurshid said the new ministers were expected to think “out of the box”.

The new foreign minister told reporters that he saw “great opportunities… but also great challenges to peace and prosperity in our world”.

Singh confirmed that he had offered a cabinet post to Rahul Gandhi, whose father, grandmother and great-grandfather all served as prime minister, but the offer was declined.

“I wanted Rahul Gandhi in government but he wants to strengthen the party,” Singh said.