Used to be that carpet­wallah­s hauled the real thing about. These are now replac­ed by synthe­tic apolog­ies for carpet­s.
By Zahra Nasir
Published: September 9, 2010
Tweet Email 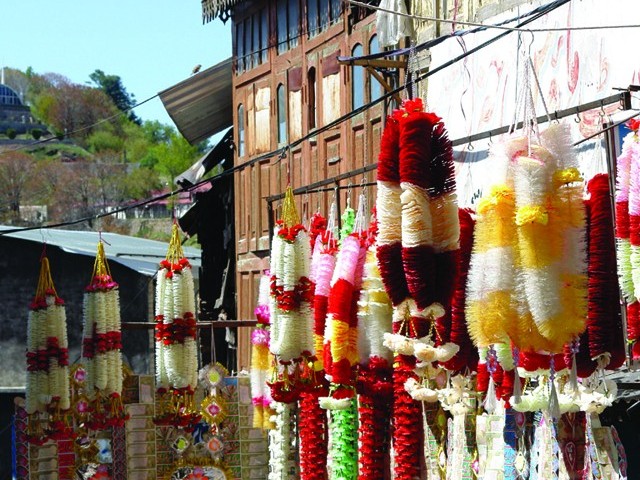 It used to be that carpet wallahs hauled the real thing around, hand woven, pure wool, works of art.

“Prrrreshure cucker. Prrrrrrrrrrrrreshure cucker” blasts a voice through a hand-held, battery operated loudspeaker as a young Pathan in plastic sandals wanders the mountainside with a chador wrapped bundle slung across his back. “Prrrreshure cucker. Top class quality prrrrrrrrrrrrreshure cucker at low price.” The only reaction he gets is from mynah birds who squawk at him in passing and my dogs of course who figure any itinerant peddler is fair game. Everyone in this neck of the woods, except for yours truly, already own pressure cookers which splutter and hiss alarmingly from their spot on top of wood burning stoves. If the aroma escaping from them is anything to judge by, then every single household here is addicted to chickpeas. I adore chickpeas too but I am utterly petrified of pressure cookers. This fear, a very real fear which drives me completely out of range of even the most polite little hiss, has its roots in childhood when the myth of pressure cookers depositing lunch on the kitchen ceiling became a terrifying reality. Mutton stew, a family favourite. We had thick pea soup, from a tin, instead. I soak chickpeas overnight along with a large spoonful of baking powder to soften them up yet still they have to be cooked for hours to make them edible. They are not an environmentally friendly dish!

The pressure cooker wallah is not alone. Lagging five minutes behind is a ‘carpet’ seller. A purveyor of “Plllllllastic.”

It used to be that carpet wallahs hauled the real thing around, hand woven, pure wool, works of art. These were replaced by machine made synthetic apologies for carpets and then, about three years ago, a downgrade to plastic mats came in force and I, for one, completely lost interest although someone must buy them or these guys would long since have switched to selling other goods.

As recently as twelve years back, way before road access turned life on its head, an excitingly picturesque mule and pony caravan, comprising a dozen heavily laden beasts, wended its way along the narrow mountain path at three month intervals. The wizened old man, he could have been a real live pixie actually, ambled along in the wake of his bell-tinkling animals, sometimes stopping to have a snooze while they grazed. Each pack animal was loaded with different goodies: Pieces of cloth on one, real Kashmiri chadors on another, plastic kitchenware, pots and pans, knifes and scythes, blankets of dubious ancestry, plastic and leather sandals, home churned butter and cheese, seasonal fruit and vegetables, lentils, beans and tea and one strong animal to be loaded up with firewood as he journeyed. His visits were an event. His gossip eagerly anticipated. One year he didn’t come and that was that. The end of an era in this particular part of the country. I suspect that he now travels the ether: perhaps he is currently pedalling his goods in the vicinity of sirus, the ‘dog star’ or has decided to explore a black hole. Wherever he is though he lives on, fondly, in memory.

The current crop of peddlers is a different kettle of fish altogether. Mostly young Pathans with a few Afghans thrown in for good measure, they arrive with the spring and disappear again in autumn once the days turn crisp and nights deliciously chill.

On the whole they try to sell shoddy goods at expensive prices and make up monetary shortcomings by stealing whatever happens to be lying loose and some things that aren’t. Just before Ramadan there was a huge wedding in the community and, on the Saturday night, everyone trekked off to a reception at the bridegrooms’ house on the other side of the mountain. Come Sunday afternoon when they wandered back home it was to discover that three of them had been robbed. Door locks levered off, clothing, shoes, bedding, radios, a television, nick-knacks, even school uniforms gone. The robbers obviously knew about the wedding, knew that houses would be empty and had transport to haul their loot away. Strangely enough, they didn’t steal a single morsel of food which suggests, to me at least, that they were local people not itinerant peddlers but…no one knows for sure. There were, however, a number of strange vehicles seen on the road. This is just one of the prices we pay for drivable access.

Another price, to those who care about the environment, is the timber which is hauled away in the dark hours between midnight and dawn. Prior to the advent of the road, trees had a habit of disappearing from the forest to fuel local stoves during the winter months. Wood smoke was only seen during the rest of the year when someone ran out of cash and couldn’t afford to have a gas cylinder refilled. Wood smoke in summer served as a signal informing the community that one of their members was in dire financial straits but this too has changed. Wood smoke is year round now and no one thinks twice about it. Everyone is short of cash. Some so short that they co-operate with the timber mafia to steal the forest wealth for short-term financial gain. They don’t think of a treeless future and its associated implications. It’s cash on the nail right now.

The arrival of the road also destroyed the wedding spirit: Brides are no longer carried in ornate palanquins on the shoulders of male relatives with the entire community following behind singing traditional wedding songs. Grooms no longer arrive on horseback. Cars and taxis plastered with plastic flowers have transmuted splendid occasions in to base events with ‘hotel’ food and plastic chairs hired for the day. One day here, one day there and everyone searching for a toilet. It wasn’t like this when the food was lovingly prepared at home!

Pressure cookers, come to think of it, are a favourite wedding gift. The happy couple who so recently tied the knot had seven shiny pressure cookers on display. They also had a pink fridge, an orange plastic dinner set embellished with purple flowers, three sets of aluminum pans, four Chinese made blankets, a navy blue velveteen sofa set complete with pale blue tassels, a traditional wooden bed, a pair of table lamps with plastic peacock bases, six sets of six water glasses and matching jugs, five melamine tea sets, two huge flasks and a locally made washing machine with a plastic body!

The bride displayed a total of 27 joras in cotton, nylon chiffon, nylon silk, polyester and some in fabrics that defy description. She also displayed seven pairs of very glitzy high heeled shoes which will be of no use at all once she gets down to the task of caring for the five buffaloes at her new home. The matching handbags, miniscule frivolous affairs, will be more of a hindrance than a help as she hauls heavy purchases back from the nearest bazaar but she is delighted, totally over the moon with her new lot in life and, for the time being, the trimmings that go with it. I have no idea of what the groom got other than a very sweet wife who is used to working from dawn until well after sunset but, I guess, this is exactly what his mother wanted!