At least nine people includ­ing one police­man were injure­d as vehicl­es were set alight and shops damage­d.
By AFP
Published: October 25, 2012
Tweet Email 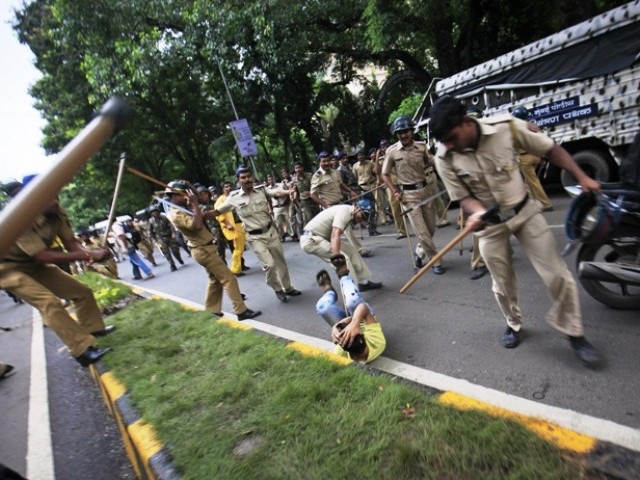 At least nine people including one policeman were injured as vehicles were set alight and shops damaged. PHOTO: REUTERS/ FILE

LUCKNOW: Police imposed a curfew Thursday after Hindu-Muslim clashes during the Indian festival season in the state of Uttar Pradesh, near where deadly religious riots flared 20 years ago.

The curfew was clamped on parts of Faizabad city following communal violence over the immersion of Hindu idols in a river on Wednesday to mark the festival of Durga Puja.

Officers used tear gas and fired live rounds in the air to control the fighting. At least nine people including one policeman were injured as vehicles were set alight and shops damaged.

Faizabad is next to Ayodhya, home to the Babri mosque that was razed in 1992 by Hindu zealots. Subsequent riots killed more than 2,000 people, mostly Muslims, in some of the worst sectarian violence since Indian independence.

“My government will hunt down people out to disrupt the communal harmony in the state,” Uttar Pradesh chief minister Akhilesh Yadav told reporters in the state capital Lucknow.

At least 12 people have been killed in the last seven months in inter-religious violence in Uttar Pradesh, raising fears that tensions between Hindus and Muslims are increasing in the state.

“Additional police and paramilitary reinforcements have been rushed to the areas where clashes were reported,” senior police officer Badri Prasad Singh told AFP.

Hindus say the Babri mosque was built by the Mughal emperor Babur on the site of a temple marking the birthplace of the Hindu warrior god Ram.

The drive to build a Ram temple on the ruins of the razed mosque remains a policy of the main opposition Hindu nationalist Bharatiya Janata Party, which came to national prominence over the Ayodhya issue.

The curfew closed all schools until further notice and many temples were shut during the day.