Towards a tolerant society: For a peaceful future, unlearn the ‘biased, violent past’

Towards a tolerant society: For a peaceful future, unlearn the ‘biased, violent past’ 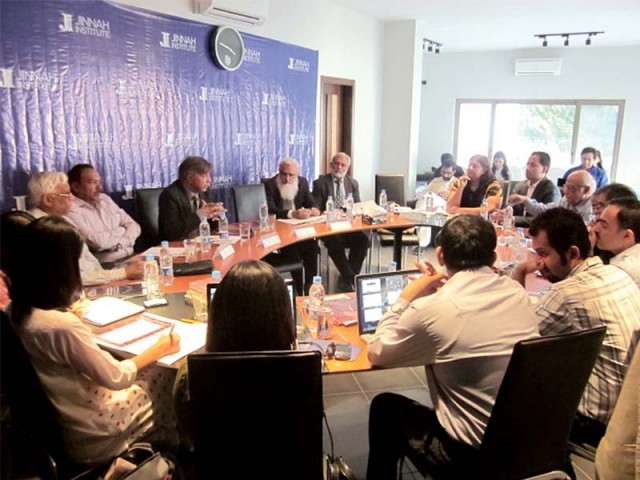 The textbooks used in Pakistan’s schools today are rife with factual errors and hatred towards a number of religious groups.

Given that increasing extremism poses an existential threat to Pakistan; the government, civil society, education experts and citizens all need to contribute to a serious process of curriculum reform to help combat the growing levels of intolerance in society.

This was the view of participants at a roundtable discussion on curriculum development and textbook reform in Pakistan, organised by the Jinnah Institute in collaboration with the National Commission for Justice and Peace (NCJP) on Tuesday.

Opening the discussion, Raza Rumi, director of Policy and Programmes at the Jinnah Institute, pointed out that cooperation between all stakeholders in the education sector is required to achieve better policy outcomes. “We need to find a balance between civil society and government initiatives so that innovative solutions to curriculum-related issues can be implemented,” he said.

NCJP Executive Director Peter Jacob shared the commission’s report on biases in the textbooks and how such material not only impacts the minds of the Muslim students, but also harms the education and growth of non-Muslim students. Further, the participants discussed the need for devising policy and advocacy interventions, outlined the process of correcting hate material and stressed that a concerted effort needs to be made to review the subtle messages in educational materials with respect to minorities, women rights and the freedom of religion and speech.

Haider Abbas Rizvi, deputy parliamentary leader of the Muttahida Qaumi Movement (MQM) in Pakistan’s National Assembly, spoke about the damage caused to Pakistani minds by an education system that teaches them a falsified version of history. “When students come out of this system and independently look at the world, their minds are struck by the contradictions. Many reject both then and become part of a confused generation,” Rizvi said, adding that he will pursue the matter with the education minister in the Sindh province, where his party is a member of the coalition government.

Samson Sharaf of the Pakistan Tehreek-e-Insaf (PTI) detailed the persecution of non-Muslim Pakistanis over two decades and how they have been deprived of the opportunity to live as full citizens.

Meanwhile, a call for introducing peace studies as a subject in schools was made at a seminar on Monday.

The discussion that brought together students, academics, representatives of non-governmental organisations and journalists, was held by Peace Education and Development Foundation (PEAD) in collaboration with ActionAid Pakistan.

A research report on Khyber-Pakhtunkhwa’s (K-P) curriculum review by PEAD Executive Director Sameena Imtiaz was also discussed during the event.

The report, “Need for Change!”, gives an extensive review of the current state of curriculum in K-P. It explores how textbooks are glorifying war, reinstating stereotypes and promoting religious exclusivity.

“We are trying to work on policy and advocacy in the province since they have announced curriculum reforms. This can be a fruitful opportunity to sensitise students on peace, tolerance and prosperity,” she said.

Romana Bashir, the director of Christian Studies Centre, gave an insight into how tolerance can be increased by strengthening communication between communities.

The discussion was joined by physicist and peace activist AH Nayyar via Skype. Nayyar noted that the biggest shortcoming in the current curriculum is that it hardly polishes students’ learning and analytical skills. Furthermore, what is taught in most public schools is exclusionary, ideology-driven, bigoted, and generates negative stereotypes, he said.