In the 1950s, the Afghan govern­ment constr­ucted the grave of Hameed Baba.
By Riaz Ahmad
Published: October 22, 2012
Tweet Email 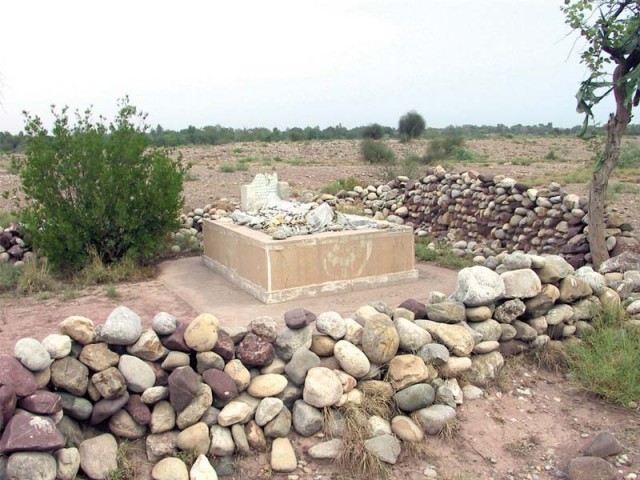 PESHAWAR: Sufi poet Abdul Hameed’s grave, which barely lies 15 kilometres away from Peshawar, symbolises the place of poets and intellectuals in Pakistan. At an ancient graveyard adjacent to the village of Masho Khel, the 18th century poet’s burial site lies in shambles.

It is said that in the 1950s, the Afghan government constructed the graves of Sufi poet Rahman Baba, Khushal Khan Khattak and Abdul Hameed, but years of negligence has left their graves in ruins. Abdul Hamed is popularly known as Hameed Baba.

In the past years, provincial governments reconstructed the mausoleums of Khushal Khan Khattak, Hamza Khan Shinwari and Rahman Baba. It even funded the construction of a tomb for nationalist politician and well-known Pashto poet Ajmal Khattak, but no attention was given to the repair of Hameed’s grave.

In his book ‘Selections from the Poetry of the Afghans, from the 16th to the 19th Century (1862)’, HG Raverty writes that Hameed was the cynical poet of the Afghans and the Sheikh Saadi of the Pashto language – a statement that speaks volumes of the poetic achievements of the man.

“Some of Hameed’s odes reached the ears of Rahman Baba and he sent for the poet to come and visit him. Rehman Baba was so pleased with his modesty and humility, that he gave him his blessings and prayed that his verses might be sweet unto all men and that no one ever excels him in Pashto poetry. And to this day, Hameed has not been surpassed,” Ravetry wrote.

Talking to The Express Tribune the general secretary of the Hameed Adabi Tolana, Noorul Basar, said: “It’s a shame to see Hameed Baba’s grave in ruins. It is no more than a pile of stones.”

Basar suggested that a road should be constructed which leads to the grave, adding that a library and mausoleum should also be built in honour of the poet.

Hameed’s poetry was popular even in Persia, where he was dubbed “Hameed the Hair-splitter”. His major works, Love’s Fascination, The King and the Beggar and Pearls and Corals have all been translated into English.

Hameed’s exact death date is not known, but is believed to have died in the year 1732.