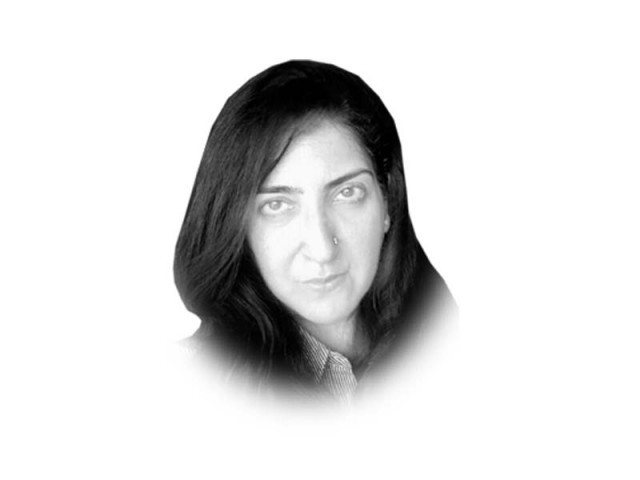 The writer is an Indian author-columnist. She also blogs at http://farzana-versey.blogspot.com/

Forget about separation of religion and state. Can religion survive without a state? Would it be orphaned without patriotic fervour?

I come from a country that is secular. Yet, its largest opposition party has dreams of a Hindu Rashtra. The government offers sops to every faith. There are regional groups that seek special status for language and ethnicity. Tribes and scheduled castes have their own demands and the nation owes it to them, not because the Constitution has failed them but the faith they were born in has. The Constitution, in effect, is keeping belief systems alive.

Does India have a right to be called a secular republic? Is this not merely about multiculturalism, the subsuming into an Axe effect that starts wearing off once the pores start emitting sweat again? ‘Iftar’ and ‘pandal’ politics are now so well-entrenched that it would be unthinkable for any political party to upset this neo-status quo, which is quite precious for a status quo is usually an established model. There appears to be only a repackaging of tradition.

The recent Pew Research Centre’s study that reveals 19.6 per cent Americans believe in “nothing in particular” is considered a departure from stratified norms. It draws attention to US politics within the framework of piety. To suggest that one in five adults is not using traditional patterns does not mean much. Even in states with a religious constitution, there are the rebound and rethink dissonances. Pakistan is a prime example. Rather, religion gives the state a long rope to hang itself with.

As the study team said, “Sociologists have shown that Americans are more likely to pick their place of worship by their politics, not vice versa.” How does this bode for the religion of the state when not only is the faith factor divided by race, but political choices made by the ‘nones’?

Dan Barker, Co-President of The Freedom From Religion Foundation (FFRF), thinks it is a pertinent yardstick: “…when are politicians and candidates going to wake up to the changing demographics and start courting us? Secularists are looking for candidates who share a commitment to America’s foundational principle of separation between religion and government.”

It depends on how deep one excavates to get to the foundation. After the American War, the states expected government office-bearers to express fealty to the Trinity and declare the divine inspiration of the Bible. We may move on, but history is embedded.

In the run-up to the elections, FFRF is putting up billboards showing regular families — the big American fantasy — with catchphrases: “This is what an atheist family looks like”, “I’m secular and I vote”, “We’re too old for imaginary friends”, “Atheists work to make this life heavenly”.

How different are these notional divisions from devotional ones? Who will they vote for? What are the candidates promising besides the usual civic issues? President Barack Obama and Mitt Romney have both alluded to religion. ‘Other’ faiths are mentioned either as a species to be protected or as a threat.

Richard Dawkins who wrote The God Delusion partly as a reaction to 9/11 has suggested that whatever may have been the hijackers’ political or social motivations, it was a religious act based on the conviction that they would be rewarded in the afterlife.

The proponents of such theocracy use this as a cover-up. It might explain the ‘non-state’ nature of these actors, too. Their religion gives the attacked country a carte blanche to choose its opponents from the many streams of Islamic thought. Curiously enough, the US did not strike at the fount — Saudi Arabia.

Would the ‘religious act’ argument apply to the violence in Tibet, a Buddhist state? The self-immolation by monks and nuns could also be seen as a violent act, and the ethnicity of the people depends to a great extent on its religion to survive. Devotees are blamed for deifying the founder. The moot question here is: Why, then, are there Buddhist states? Hypothetically, without a supreme being or an emissary, as much as a political or philosophical leader, is it possible to sustain any creed?

Even in non-religious societies, as in communist states, there will be fringe pious groups — whether it is the Russian Orthodox Church or minorities in China. The state is expected to uphold their rights or else deal with ideological skirmishes and bloodshed.

There is a belief that superimposed unity is counterproductive. Douglas Murray, director of the Centre for Social Cohesion in London, quite naturally upholds ‘purity’: “State-sponsored multiculturalism treated European countries like hostelries. It judged that the state should not ‘impose’ rules and values on newcomers. The resultant policy was that states treated and judged people by the criteria of whatever  ‘community’ they found themselves born into.”

In Britain, where the Church of England is effectively the state religion, what culture could be used as a standard and how would it negotiate nationalism? We do tend to use the word culture to take away the harsh reality that almost all cultures depend on value systems and these, even as heresy, are often imbibed from sacred texts. Therefore, the non-canonical is perforce born of the consecrated and remains a recusant faith, as it were. To prove otherwise is merely akin to spilling ink over scriptures. Secularism as negation is as hallucinatory as the perennial queries about God. It must be pointed out that over-the-top nationalism putting country above all else uses a theistic paradigm.

If the Indian nation did not identify me as a Muslim, I would have — as when the rare occasion permitted me — filled in the religion column with “Not Applicable”. The onus is on the state to stop acting like a shrine.