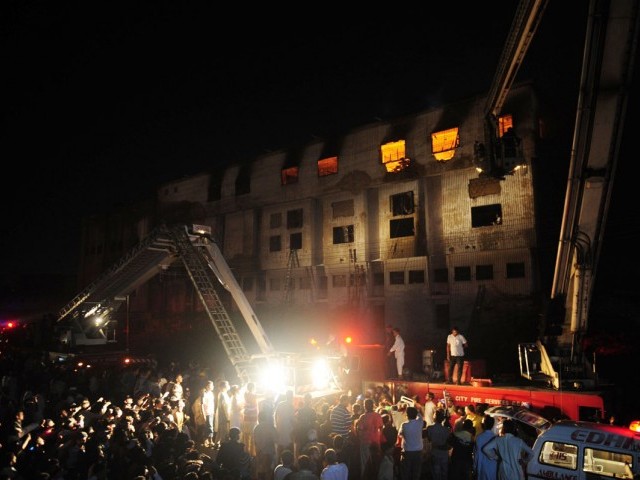 A month-and-a-half since the disaster, there is no official record, no list, no names being put forward by authorities of how many were present the day the fire broke out, or an exact death toll. PHOTO: AFP/ FILE

The flames may have long been extinguished, but the ghosts of the ill-fated Baldia Town factory continue to haunt.

For Rasheeda, a visit to the gutted factory is almost an everyday routine. In front of the sealed building, enclosed by police officers and containers, she puts forward the usual question about her son Khurshid.

“Has his body been found?”

“No bibi. Go away from here. No one can go inside.”

And just like any other day since September 11, she returns home with no news about her son, one of 259 people who perished in the flames of Pakistan’s largest factory fire. Rasheeda is from one of 70 families who all but know their fate, but continue to wait for that final closure.

A month-and-a-half since the disaster, there is no official record, no list, no names being put forward by authorities of how many people worked at the factory, how many were present the day the fire broke out, or an exact death toll.

Investigation Officer Jahanzaib Khan told The Express Tribune that he has requested the court to allow him to meet the owners of the factory to fetch records of the workers — both alive and deceased.

Jahanzaib has finally conceded that the number of workers feared dead might be much higher than what authorities have revealed officially.

“The death toll might be higher. The confusion would clear once we are allowed to retrieve information from the factory’s administration block which was safe from the fire.”

But with only 500 of the said 1,200 workers registered, this seems a daunting task, he adds.

With such discrepancies, chances of the number of workers who died in the inferno seem to be higher than the official toll of 259. The police officer has received 100 complaints of people gone missing in the factory fire. Social activists have put up a list of 74 victims whose bodies have not been found yet.

Those lying in the Edhi morgue are only 32.

The former commissioner says that 11 body parts were found separately from the site.

Trade unionist Nasir Mansoor, who helped locate the 74 families, says that there is a huge question over the issue of where the remaining bodies are. “Why is the government mum over it? Have the bodies been swallowed by the earth? There is no system in place to find them.”

Swallowed or not, the leading fireman of the operation, Feroze Khan, believes that those who are missing have either turned to charred remains and ashes in the top floor mixed with smouldered furniture, or been washed away. “I saw human remains.”

Roshan Ali Shaikh, who was the city’s commissioner when the fire broke out, told The Express Tribune that the death toll was announced on the number of bodies that were found from the factory — but admits the actual number could be higher.

“It’s likely that more people died in the fire and nothing remains of them. Four years ago, when a fire broke out in a chemical factory in the city, there was no trace [of survivors] when fire-fighters went to douse it. Nothing was found of them.”

Majority of the 32 unidentified bodies at the Edhi morgue are not intact. In the cold storage room, covered with white sheets, there are charred limbs and exposed bones. “It is difficult to point out if they belong to a man or a woman,” said an official.

Out of the 39 bodies which were brought initially, DNA results of only seven have come out. “If the government takes no action in the coming days, we will have to bury them ourselves.”

Meanwhile, family members, and representatives of trade unions and civil society have demanded that the government take concrete steps to identify the remaining bodies and hand them over to the families.

During a meeting organised at the Pakistan Medical Association House on Wednesday, speakers said that the government should consider workers whose whereabouts are not known ‘dead’.

The man who makes the mandi, meet Chaudhry saheb