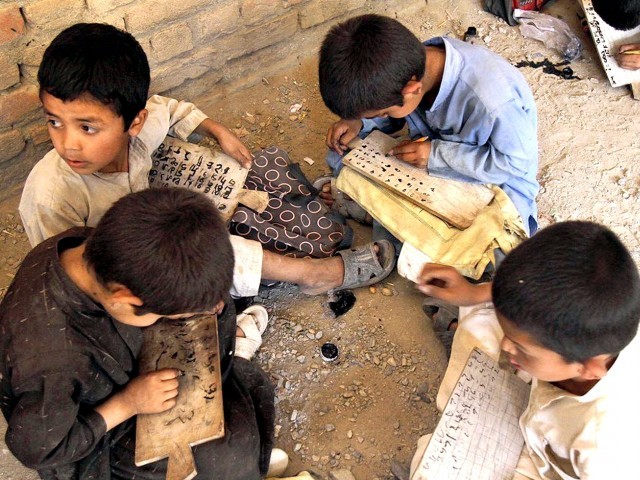 Education for All Global Monitoring report shows 19.75m children, aged 5 to 9, are out of schools. PHOTO: INP/FILE

According to the report, launched at the Marriott Hotel in Islamabad on Thursday, about a quarter of the 19.75 million children in Pakistan aged five to nine are out of school. If the age bracket is increased to include adolescents, then about 25 million are not enrolled in school, out of a total school-going population of about 45 million.

Pakistan’s Education Development Index (EDI) is 113 according to the report, much worse off than regional contemporaries such as India (102), Bhutan (98) and Egypt (97).

Health is also an important indicator of progress in education. Children under five years of age who have stunted growth are important heath indicators. The report shows that 32% of Pakistani infants suffer from low birth weight, as compared to 28% in India, 21% in Nepal, and 22% in Bangladesh.

According to Unesco statistics in 2010, the total primary education enrollment in Pakistan was 74%, higher than Nepal’s rate of 65%, but lower than India, Maldives and Iran, who enjoy a primary education rate in the 90th percentile.

“If we want 100% primary enrollment and we continue at the same pace as now, we might be able to reach our EFA goal in the next 20 years. However, if we want to speed up our development we have to find innovative ways to do so,” commented Arshad Saeed Khan, Senior Unesco’s National Education Specialist, while speaking to The Express Tribune.

Pakistani girls and women suffer the most in terms of education and employment, with 63% of girls of school-going age out of schools, according to the report. Female literacy rate is at 40% in Pakistan, compared to 51% in India and 52% in Bangladesh.

According to the report, the quality of the education in Pakistan is very closely tied to the budgetary funds allocated to education. Compared to other countries in the region, Pakistan’s expenditure is significantly lower at 2.3 %, where as India’s is 4.5%, Iran’s is 4.7% and Bhutan’s is 4.4%.