What we have seen thus far has been a pathet­ic displa­y of warped priori­ties from nearly every instit­ution of state.
By Ayesha Ijaz Khan
Published: October 15, 2012
Tweet Email 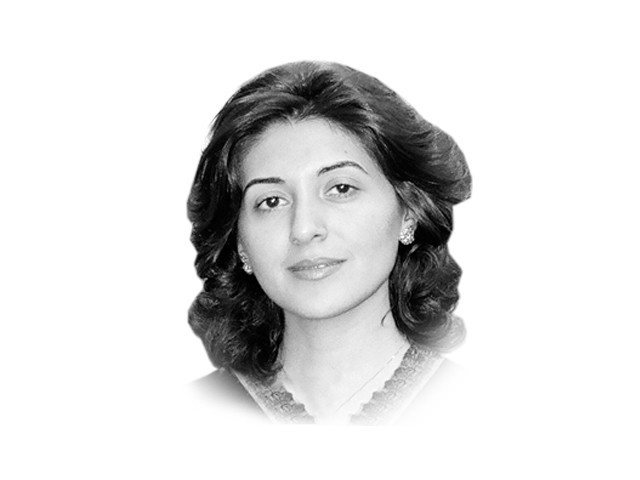 The writer is a London-based lawyer and tweets @ayeshaijazkhan

The brutal attack on Malala Yousafzai by the TTP and the subsequent claim by its spokesman that she would be attacked again if she survived should leave no doubt in anyone’s mind as to what Pakistan’s number one problem and biggest obstacle to progress is. Any activist, politician or religious leader who dares to speak out against this barbaric and regressive ideology is immediately labelled “an agent of the West” and thus fair game to eliminate. Whether the person in question has spent time in the West, as in the case of Benazir Bhutto, or not — as in the case of Malala — is quite irrelevant. What is relevant is that these thugs want to take over the state and will use fear to do it as they do not have an ideology that could appeal to voters. They use religion as an excuse though they equally target those who understand religion far better than they do, such as the eminent Javed Ghamidi, who had to leave Pakistan due to threats for his rational and enlightened interpretations of religion.

It is time now to wake up. Malala does not need offers of financial assistance to pay her medical expenses from the government or opposition leaders. There are plenty of private sources who would be more than willing to do that. What the government and opposition need to do is to name, condemn and act against these monsters. There can be no more state patronage of such forces, whether by the military or the bureaucracy. There must be zero tolerance for labelling people as “slaves/agents of the West” or “anti-state or religion” in the media as this creates the environment which emboldens such people to act. And the civilian government, too, must realise that unless it delivers basic necessities to the people, it will continue to be demonised and the necessary mass required for this collective action will be difficult to gather. What we have seen thus far has been a pathetic display of warped priorities from nearly every institution of state and I would like to address these in turn.

Let’s begin with the military. As the most powerful institution of state, it has not only consumed the lion’s share of our resources but has also relied heavily on US aid to build itself. Of the $30 billion Pakistan has received in US aid since 1948, half has gone to the military. Pakistan had legitimate security concerns and needed a strong army. Therefore, if it used US aid to build its army, there is nothing wrong with that. But what is wrong is the misinformation spread by military mouthpieces and particularly by those politicians backed by the army. In the early 1990s, this role was played by Nawaz Sharif and today it is played by Imran Khan. The military seems to have a strategy to discredit civilian governments by labelling them as “sell-outs” and too close to America. Yet, the reality is that Pakistan has been far more closely allied with the US during military dictatorships than during civilian rule. So what is the hoopla about? The same approach is used on the drone issue. Having provided the US with bases to operate the drones from, the military is now making all the anti-drone noises through its preferred politician. For its part, the civilian government is too weak, too incompetent and perhaps, increasingly too unpopular to explain the reality to the people. As a result, confusion abounds regarding sovereignty and whether or not it is our war. When this clash occurs between two key institutions of state, the military and the civilian government, the terrorists benefit.

Yet, the military and the civilian government are not the only ones clashing. There is a clash equally between the judiciary and the executive. After General (retd) Pervez Musharraf deposed a sitting chief justice and a lawyers’ movement eventually led to the restoration of democracy, it was most unbecoming of President Asif Ali Zardari to go back on his word to restore the chief justice. Dilly-dallying on that issue not only alienated the PML-N that was willing to work together with the PPP after the euphoric return to democracy, but precious time was lost battling the judiciary instead of terrorism. By the time the judiciary was finally restored, President Zardari had sidelined some of the most competent members of his party in favour of those who had given him bad advice. The judiciary, too, for its part, seems to have held that delay against the president and contrary to high expectations of those of us who supported the movement for the establishment of a just and impartial Court, it appears often that we may only have gotten a petty populist one.

This clash between the executive and judiciary has kept the country fixated on most superfluous matters. While the Court has pursued the matter of the Swiss letter at the expense of many other more pressing concerns, the PPP government has also remained defiant and refused to cooperate such that the country can move on. While jailbreaks releasing terrorists in Bannu or Shias killed in Quetta remain low priorities for the judiciary to intervene, purging the handful of dual nationals in parliament seems to be high on the to-do list. Resources are disproportionately expended on picking easy targets which have no net positive effect on Pakistan, while more pressing concerns remain unattended. The Election Commission of Pakistan, for instance, equally zealous to disempower dual nationals, takes a cowardly line on empowering women and acquiesces to constituency politicians from areas where women are denied the right to vote.

Priorities are so skewed in terms of what is important and what is not. While both the judiciary and the bureaucracy remain soft on the question of terrorism, the PPP core has its bearings in the right place when it comes to terrorists. Surely, both the ANP and PPP have suffered the loss of party workers and leaders to this fight, too. But, unless people are at least given basic security, electricity and water, it is difficult to expect them to support the government. Instead, resentment grows when politicians from the ruling coalition travel in SUVs blocking roads en route to palatial homes, all the while paying a pittance in taxes. Unfortunately, those in the opposition don’t offer better alternatives. If they can’t even appropriately acknowledge Pakistan’s most fundamental problem, how will they ever fix it?

The death of logic